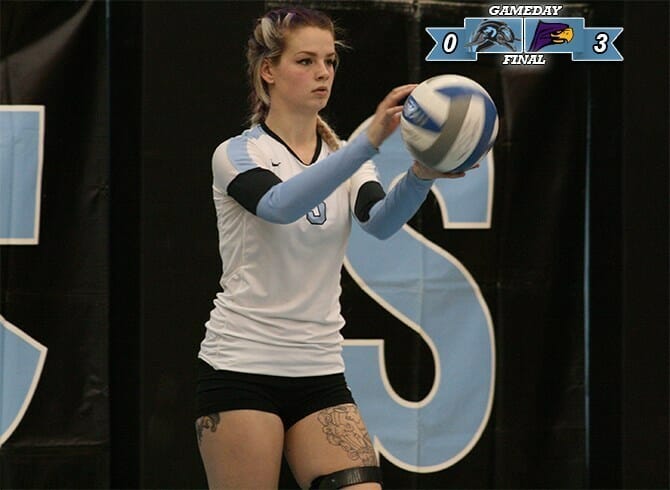 The College of Staten Island women’s volleyball squad dropped their final regular season home game and their conference finale tonight, falling to Hunter College, 3-0, at the Sports & Recreation Center. Individual scores were, 25-12, 25-13, and 25-16. CSI slipped to 8-13 overall and 3-5 within the CUNYAC, while the Hawks lifted to 19-12, 7-1, respectively. For the final home of the regular season, the Dolphins partnered with Matt Valente and the Walk4 Foundation, promoting stem cell research for spinal cord injury.

It was tough treading for CSI from the outset, as Hunter twice erased mini leads the Dolphins were able to grab to start the first and third sets. In set one, the Hawks went on a 12-2 tear after CSI grabbed a quick 2-0 lead. CSI returned the favor with a 10-4 run, highlighted by a pair of Siobhan Granich kills. Still, Hunter was able to weather the storm and bounced back in time to finish the set on an 11-2 run to win it, 25-12.

After leading wire-to-wire in the second set, CSI responded with a nice start to the third set, taking a 3-0 lead before Hunter woke up to a 7-1 run. Samantha Barrett smashed two kills in the run and it was rather smooth sailing from there as Hunter was able to take the game, 25-16.

At the conclusion of the match the CSI volleyball team collected with Matt Valente, a former Petrides High School wrestler to create a commemorative canvas that will be on display to help raise awareness for the Walk4 Foundation. Fans are asked to visit the Walk4 Facebook page and like the page at www.facebook.com/Walk4.

CSI’s final contests of the season will be on Thursday, when they travel for a non-conference match against William Paterson University. The CUNYAC Postseason Tournament Championship begins next week. CSI will learn of their postseason fate and quarterfinal matchup this coming Friday.