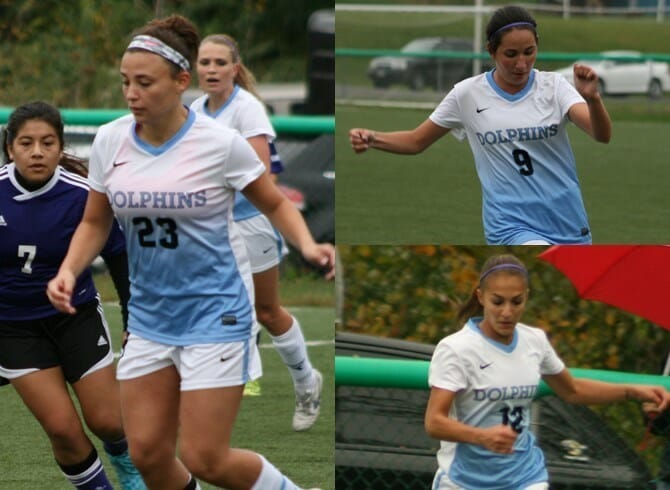 The College of Staten Island women’s soccer team continues to pile up its listing of awards as three Dolphins were named to the All-ECAC Metro teams this week.  Senior pair Melissa Gelardi and Alyssa Colasurdo were named to the first-team’s list of honorees, while junior Danielle Alexandrini was named to the unit’s second-team.

A four-year CUNYAC All-Star, Melissa Gelardi had another record breaking season in 2014.  The midfielder posted five goals and a team-leading 16 assists, good for fifth overall in NCAA Division III.  She also posted a team-high 64 shots in her 19 games.  For her career, Gelardi decimated the all-time assist record at the College, finishing with 75 career helpers, 48 more than any other Dolphin.  Her 103 total points ranked her fourth all-time, while her 202 career shots stand fifth all-time.

Unlike Gelardi, Colasurdo did most of her damage on the defensive side of the ball.  The senior played in all 20 games this season, registering a pair of shots but was often tasked with flanking the right wing defensively, helping CSI to 9 shutouts this season.

Junior Alexandrini was a force on the wing as an attacker this season, earning on to the second team.  Alexandrini finished with six goals and four assists this season, second on the squad in each category.  She was fourth on the team with 29 total shots, and picked up a pair of game-winning goals.