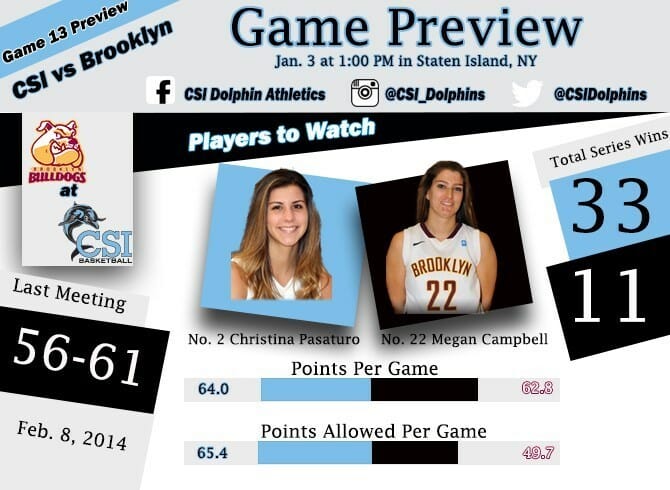 The last time these two teams met was in February 8, 2014 at the CSI Sports & Rec Center in Staten Island for the ECAC semifinals where Brooklyn College was able to defeat the Dolphins 61-56.  CSI is 33-11 all-time against the Bulldogs and have won two of the last five meetings.

The Bulldogs come into this afternoons competition 6-3 overall and on a four game win streak with three of those wins against CUNYAC opponents.  Brooklyn College has a Top-12 ranked defense in the country as they are only allowing 49.7 points per game which is the stingiest defense in the CUNYAC.  Senior Forward, Megan Campbell, will hope to lead her team to their fifth straight win while senior guard, Nicole Francomano will distribute the ball to the open players with hopes to jump out to an early lead.

CSI has struggled as of late as they dropped both games at the Hampton Inn Classic in Springfield, MA.  Standout freshman forward, Christina Pasaturo will need to find cracks in the stout Brooklyn College defense to lead her team to victory this afternoon.  Senior forward, Nikki Fabozzi will have her hands full underneath the glass with Campbell as both will try to dominate both sides of the floor.  The Dolphins will need to pick up this win today to get back on the winning path and keep a game lead over York College for the number four spot in the CUNYAC.

Fans, if you are unable to make this afternoon’s game you can now watch and listen live at www.csidolphins.com/watch.