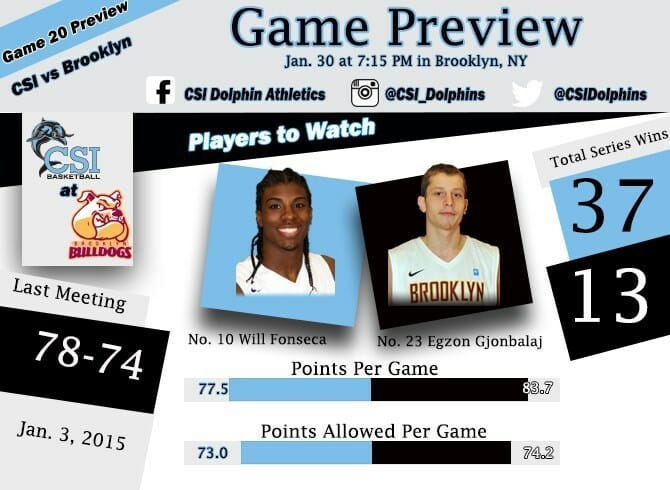 The College of Staten Island men’s basketball team is back in action tonight when they travel to Brooklyn, NY to take on Brooklyn College.  The Dolphins will head into the game with a 14-5 overall record and 8-2 in the CUNYAC while Brooklyn College is 16-4 overall and 8-3 in the CUNYAC.  The Dolphins are 37-13 all-time against the Bulldogs and have won 9 of the last 10 meetings.

Brooklyn College is a perfect 8-0 at the West Quad Center this season and will look to keep it that way when the surging Dolphins step onto their court tonight.  The Bulldogs are coming off of a tough CUNYAC loss against Lehman College, 78-81.  The men lead the CUNYAC in points per game with 83.7 and are led by Egzon Gjonbalaj with 17.7.  The entire starting lineup for the Bulldogs is averaging double digit points which makes them extremely hard to deal with as any one of their players can have a big night.

The Dolphins have been on fire lately and have won seven straight with their most recent win coming against John Jay College, 88-78.  The CUNYAC’s leading scorer Will Fonseca will look to have another dominating performance while Frank Schettino will drive to the hoop and dish the ball to open players.  Newcomer Gregory Civiletti has been a solid addition to the team as he has long range capabilities and gives opponents someone else they have to keep an eye on.  CSI is averaging 77 points per game while their defense is allowing 73 points per game.

Fans, if you are unable to make it to tonight’s game you can listen live at www.csidolphins.com/watch