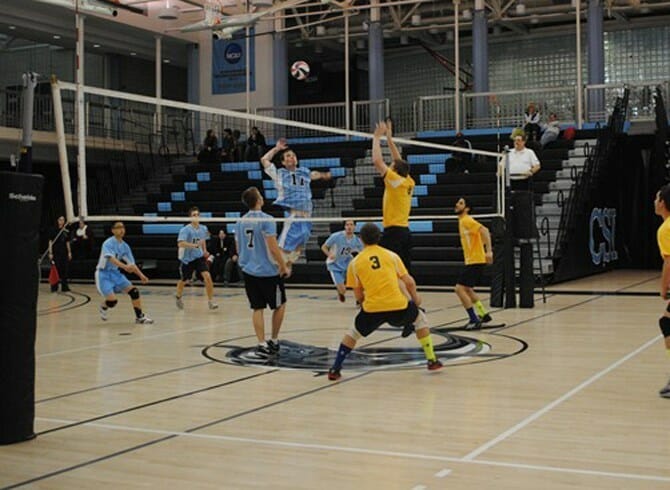 On the opening day of College of Staten Island men’s volleyball history, the Dolphins soaked in the experience, but suffered a pair of 3-0 defeats at the hands of Ramapo College and The City College of New York as part of a non-conference tri-match at Ramapo’s campus in Mahwah, NJ.  In the opener, Ramapo defeated CSI by scores of 25-13, 25-10, and 25-9, before CCNY won their three matches by tighter scores of 25-19, 25-22, and 25-15.  CSI fell to 0-2 on the season.

After a couple of seasons as a club sport at the College and then another month or practice, optimism was on high as CSI finally took the court in its first organized match, but a seasoned Ramapo team did have its way with the inexperienced Dolphins unit. CSI’s first-ever point was scored via a Brian Sheydvasser kill on a feed from Brandon Lei.   The Roadrunners, however, jumped out to a quick, 5-2, edge in the first set, and later extended to a 9-3 lead.  Ramapo kept CSI off-pace from there to win the first set, using a big 4-0 run after CSI cut the Ramapo lead to 12-6.

In the second set, CSI tried to take advantage of several Ramapo service errors, and also added a Justin Edwardsen kill, but a 7-1 RC run midway through the frame kept plenty of distance between the two sides.  In the final set, the Roadrunners jumped out to a big 14-5 edge, before cruising to the 25-9 decision.

CSI was a lot more competitive in the second contest against CCNY, spreading out 17 kills and 39 defensive digs.  The Dolphins took a quick 3-0 edge in the first set and later extended to a 7-3 lead on Shin Low’s kill.  But the Beavers came back due to a roaring 7-0 run that gave them a 12-10 edge.  CSI would later take the lead, 17-16, but from there, CCNY came alive again and finished on a 9-2 run to take the first set.

In the second set the teams battled through four lead changes but again the Dolphins were on the falling side.  They took an 11-9 lead on another Sheydvasser kill, but CCNY answered with a 4-0 spurt to take the lead back and would not give it up again.  CSI pulled to within 17-15 on a CCNY service error but then CCNY ripped off another three points to extend to a five-point lead.  Two more kills by Sheydvasser tried to get CSI closer in the final moments, but CCNY ended up putting it away, 25-22.

In the final round, CSI again had a slim early lead and CCNY came roaring back before taking the win 25-15, and sending CSI home empty.  Sheydvasser led all CSI scorers with 6 kills while Lei added 15 assists and Shin Low had a match-high 13 digs.  Anthony Reyes was the force for CCNY, collecting 17 kills and a team-leading 12 digs.