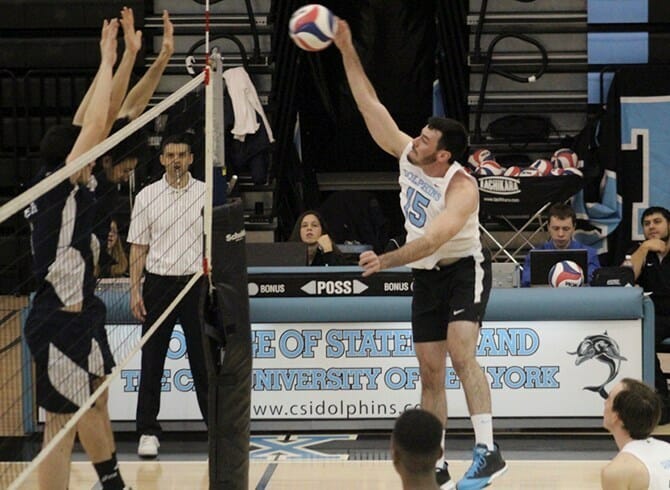 The Dolphins faced one of the premier teams in the country tonight in #10 Baruch College.  The Dolphins did not back down from the fight though as they were able to stay in the game for a while before #10 Baruch took off when Chris Kaimis was able to use his precise aim on serves to cause errors by the Dolphin defense.

Philip Szumanski had a team high 9 assists with .500 hit percentage which was also a team high.  The Dolphins had trouble defending the sheer power of the Bearcats as they hit the ball with such force that it would sail off Dolphin defenders in different directions leaving them unable to set up a quality attack.

Brian Sheydvasser once again led the men in kills with six on a .308 hit percentage.  Brady Ambro for the Bearcats had a game high 11 kills with a .444 hit percentage.  This was the second time the Dolphins faced the nationally ranked squad and met the same fate.

Up next for the Dolphins is the Bard College Tournament on Friday where they will face Rutgers-Newark, Vassar College, and the host Bard College.