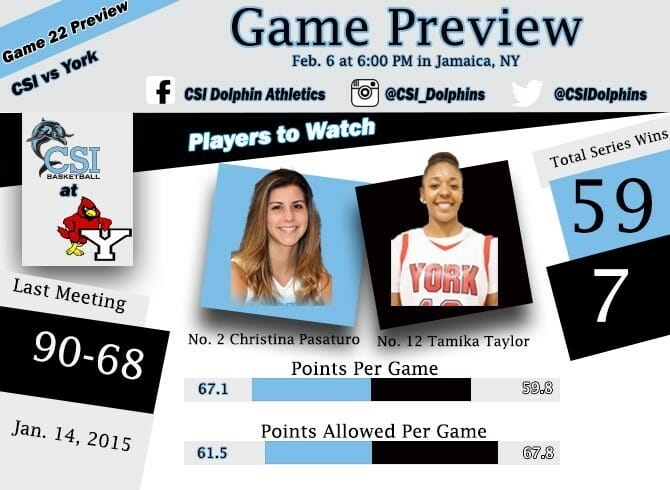 The College of Staten Island women’s basketball team will go on the road tonight to Jamaica, NY to take on York College in their second meeting of the season.  The women have had much success against the Cardinals and own the all-time series, 59-7.  Success for the Dolphins doesn’t just come on their home court they have also been quite successful at the York College Gym where they boast a 24-5 record.

The Cardinals will be tasked with guarding 9-time CUNYAC Rookie of the Week Christina Pasaturo as she torched them for 24 points and 11 rebounds in their last meeting.  Despite putting up her fifth double-double of the season on Tuesday against CCNY Pasaturo shot just 4-13 from the floor, a game she will most certainly want to forget.  Pasaturo will want to replicate her performance from the last time these two teams met and return to form with the CUNYAC Postseason Tournament only three weeks away.

Victoria Crea will also be on the Cardinals radar as she has stepped up her game in recent weeks, flying up and down the court and averaging 14 points per game over her last five outings. Her speed and knowledge of the game will keep the York defenders on their toes while they try to develop a plan to slow her down.

York College was denied their fourth straight victory on Tuesday when Brooklyn College narrowly defeated them 68-61.  Samantha Bond and Tamika Taylor combined for 44 points in the loss.

The Dolphins comfortably defeated the Cardinals in their last outing, 90-68 on 45% shooting.  The Cardinals will have to keep up their 42% shooting from Tuesday to keep up with the Dolphins offense who is averaging 68 points per game.

Fans, if you are unable to make tonight’s game you can listen live at www.csidolphins.come/watch