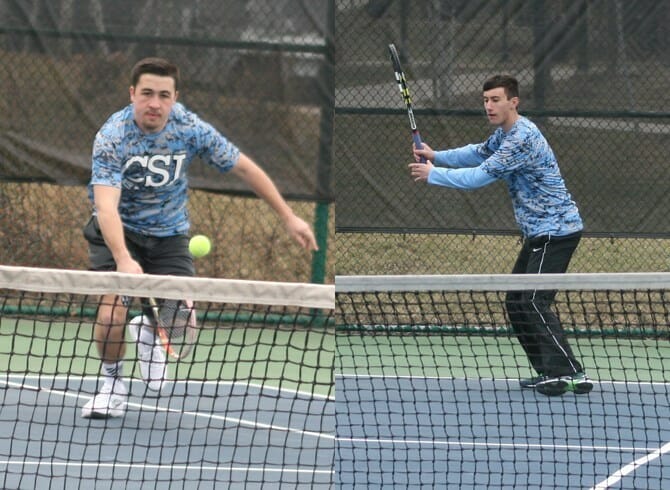 College of Staten Island men’s tennis started off on a positive note last week with a blanking of City College of New York, and the Dolphins have followed up by sweeping the City University of New York Athletic Conference’s weekly honors and an ECAC Metro honor as well. Junior Ed Ruffe took Player of the Week honors for both the CUNYAC and the ECAC Division III Metro region, while Chris Livoti took Rookie of the Week honors in CUNYAC. Both prevailed in singles and doubles to help CSI to their 1-0 week.

Ruffe, playing at the No. 1 Singles position was sharp, scoring a 6-1, 6-1, winner over CCNY’s Augustinus Hadiputro. Prior to that, Ruffe teamed with frosh Andrew Adia in the No. 1 Doubles flight, and scored an 8-1 win over the CCNY tandem of Hadiputro and Andrew Chen.

Freshman Chris Livoti was equally sharp. In his collegiate debut, Livoti scored a 6-0, 6-0, whitewash of CCNY’sSaiadivishnuSanigepalli. In Doubles, Livoti was partnered with Austin Kapetanakis, and they earned an 8-2 winner over Michael Benavidez and Max Bernstein.

CSI returns to action on Wednesday, when they travel to St. Joseph’s College of Patchogue for a 4:30pm, non-conference, test.