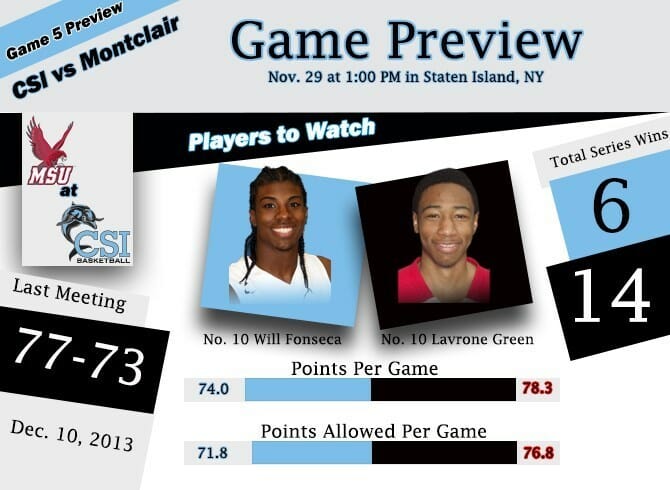 The College of Staten Island men’s basketball team will take to the court this afternoon to take on Montclair State University at 1:00 pm at the CSI Sports & Rec Center.  Montclair owns the all-time series over CSI with a record of 14-6.

The last time these two teams squared off was on December 10, 2013, where the Dolphins narrowly defeated the Red Hawks, 77-73, which was the third win in a record setting 24 straight wins for CSI.  Junior forward, Will Fonseca, was a big factor in the win as he posted 17 points with four rebounds in just 22 minutes of action.

The Red Hawks have been playing well this season as they come into this afternoons game with a solid 3-1 overall record with their only blemish coming against The College of New Jersey where they fell 58-72.  Montclair bounced right back with a big 72-70 win over NJAC rivals Kean University to put them back on the winning path.  Junior forward, Kevin McGorry, poured in 24 points and grabbed seven rebounds in that contest.  Four of the Red Hawk starters are averaging 12+ points per game which helps their team put up 78 points per game, which outscores their opponents by two.

The Dolphins are coming off of a big 81-66 CUNYAC win over Hunter College which improved their record to 2-2 overall.  Those 81 points were the highest output this season for the Dolphins and will need every one of those points to take on the high scoring Red Hawks.  Fonseca had a career game against Hunter as he scored 36 points in the contest and sophomore guard, Frankie Schettino, tied the school record for most assists in a game in that same game.  The Dolphins are averaging 74 points per game this season and holding opponents to 71.

Fans, if you are unable to make this afternoon’s game you can follow along at www.csidolphins.com/watch which showcases our SportsNet alongside our BRAND NEW live video Dolphin Stream.