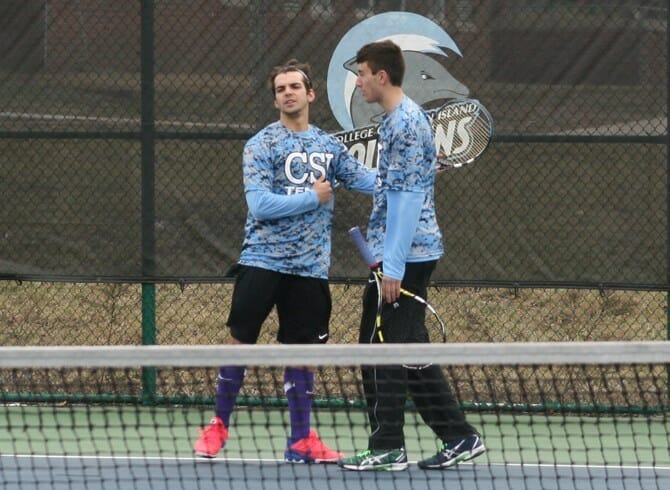 After a pair of shutout wins to open the season, the College of Staten Island men’s tennis team suffered their first setback tonight, falling to Farmingdale State College by a 6-3 count as part of non-conference play under the lights in Farmingdale, NY.  CSI fell to 2-1 on the season, while the Rams lifted their overall mark to 2-1 as well.

After a near one-hour delay in start time, play got underway with doubles, and FSC breezed through a pair of wins in doubles before a war was shaping up in the No. 2 position, where CSI’s Austin Kapetanakis and Chris Livoti were paired up against the Rams’ Dan Kafka and Marvin Beaubrun.  FSC surged ahead by a 3-0 count before CSI’s tandem started to mount a comeback, and after winning the next two games, the teams traded wins on serve.

CSI was able to turn the tide late, and score an 8-7 advantage with service, but FSC broke serve, setting up for a tiebreaker.  That went similar to the rest of the match, with both teams trading points and keeping pace.  Needing to win by two, CSI finally got through with a 12-10 victory.  By the time the match was over, two singles matches were already played and concluded, as FSC’s Aravind Mahalingam and Joe Drago scored wins in the Nos. 5 & 6 slots respectively, to give Farmingdale a 4-1 lead 1:20 into the match.

Soon after, FSC clinched the match with a 6-2, 6-1, win by Chris Hunter in No. 1 Singles over Ed Ruffe, and FSC added another win at the No. 4 spot as Andrew Adia fell to Kafka, 6-0, 6-2.  CSI’s marathon doubles team stayed on the court for singles and both had plenty to play for.

At the No. 3 spot, Livoti scored a 6-1 win in the first set, but was down, 5-4, in the second set to Dan Baruch.  Livoti turned up the heat and hit a round of winning cross-court shots to frustrate Baruch before scoring a 7-5 win to win the flight.  One notch higher, Kapetanakis found himself in a war with Kevin Palacios.  Kapetanakis won the first set, 6-4, but Palacios returned the favor with a 6-3 win, with many of the points being one off of deuces.  With all eyes on their court, the duo went to a super tiebreaker, and typical of the flight again it came right down to the wire.  Kapetanakis took a commanding 9-6 lead, but Palacios made things tighter with two straight points to make it 9-8.  Finally, with Palacios on serve, a double-fault decided the match, giving Kapetanakis the 10-8 win.

The final score finished 6-3 is FSC’s favor after an even three hours, but with a silver lining in the Livoti and Kapetanakis wins.

CSI will return to action on Thursday at 3:30pm, when they host Lehman College at the CSI Tennis Center as part of CUNYAC play.