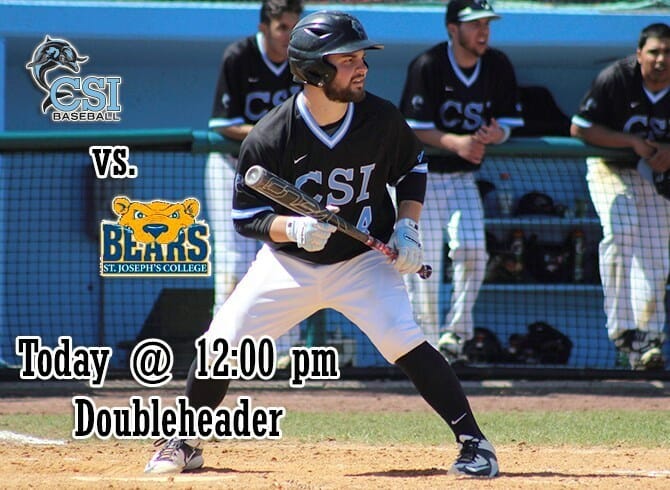 The Dolphins last took on the #2 ranked SUNY Cortland in a doubleheader yesterday here at Tomas D. Morales Field.  Staten Island put a scare into the nationally ranked power in game one as the game was tied, 3-3, in the 9th inning before Cortland was able to score one run to win the game, 4-3.

The last time these two teams met was on April 9, 2014 in Staten Island, NY where the Dolphins split with the Bears.  The Bears came out strong and took game one, 2-0, but the Dolphins refused to be swept and narrowly defeated the Bears in game two, 6-5.  CSI is 11-4 all-time against St. Joseph’s – Brooklyn however two of those losses came last season.

St. Joseph’s College has an enrollment of 5,837 and is located in Brooklyn, NY.  The Bears are, 5-5, when they hit the road this season and will want to improve upon that this afternoon.  The Bears are batting .285 as a team with a .379 on base percentage.
Fans, if you are unable to make this afternoon’s game you can follow along at http://sidearmstats.com/csi/baseball/ for our NEW live stats feature!