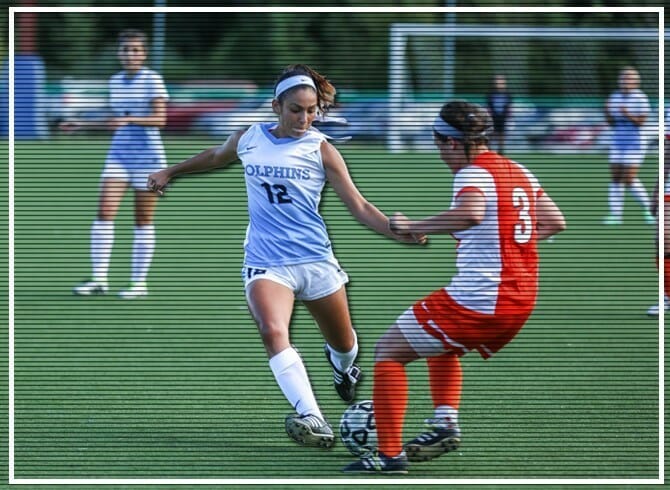 The College of Staten Island women’s soccer team recently wrapped up another enormously successful season, and today were awarded the spoils of four 1st-team All-Star citations, among them a CUNYAC Rookie of the Year honor for Krystina Rodriguez.  Defender Catherine Mulligan, midfielder Stephanie LaPointe, and senior Jennifer Cosenza were also lauded.

It was hard to deny Rodriguez, whose 14 assists led the squad and ranked fourth all-time in CSI single season history.  The freshman also knocked in eight goals, second on the squad while compiling 97 shots and 30 total points, both team highs.  She posted three multiple-assist games and her first multiple-goal game came in the CUNYAC Semifinals against Lehman College, a 4-2 win.  Her four game-winners also led the squad.   Rodriguez was a two-time CUNYAC Rookie of the Week as well this season.

What Rodriguez provided for the attack, sophomore defender Catherine Mulligan provided for defensively.  The center back was an absolute shut down anchor this season winning CUNYAC Defender of the Week on two occasions.  She helped the Dolphins produce 12 shutouts, as opponents only averaged 7.7 shots per game, a mark that included only a 6.3 shot per game average during the team’s regular season.

Freshman Stephanie LaPointe enjoyed a stellar campaign in her debut this season.  LaPointe started 18 games as an attacking midfielder, totaling four goals and six assists this season on 28 shots.  Four of her assists came against Medgar Evers College on October 8, tied for the third-highest mark in CSI single-game history.  Following that week’s action she was named the CUNYAC’s Rookie of the Week.

Rounding out the All-Star citations was none other than leading goal scorer and senior Jennifer Cosenza, who tallied a career-high 13 goals in 2016, giving her 20 for her career.  She would add three assists as well, good for 29 total points, second on the squad.  Her 53 total shots tied her for second, as did her three game-winning goals.  Tallying a pair of hat tricks this season, Cosenza also earned CUNYAC Player of the Week honors in early-September.

The Dolphins finished the year with a 12-5-2 record, notching their 8th CUNYAC Championship in back-to-back fashion at Brooklyn College.  They would go on to play Messiah College for the second straight season in the NCAA Division III National Championship’s opening round.