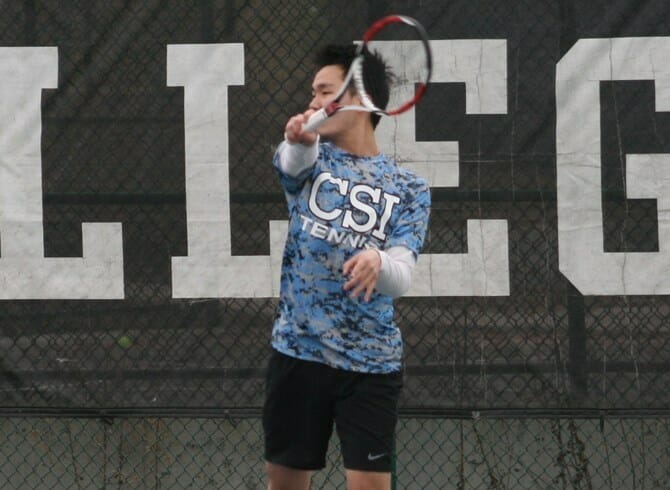 Postgame Interview – The College of Staten Island men’s tennis squad stayed red-hot in the CUNYAC, staying undefeated via a 5-4 winner over Hunter College played this afternoon at the CSI Tennis Center.  The Dolphins improved to 4-1 overall and 4-0 in CUNYAC, while the Hawks dipped to 3-2, 2-1, respectively.

Play opened with doubles and this is where the Dolphins really scored the decisive point, winning two out of three flights.  Hunter took the No. 1 flight, but CSI’s team of Chris Livoti and Austin Kapetanakis defeated Gonzalo Saez-Garcia and Roman Omelchenko, 8-2, and that joined a third flight win by Chris Pinto and Raymond Hwang over Hunter’s Rudy Saint-Louis and Bilal Naeem, by an 8-2 count.

From there, Hunter drew closer with a win by Saez-Garcia in the top spot, but then CSI’s bottom of the order did some damage.  Andrew Adia at No. 4 Singles scored a 6-1, 6-1, win over Saint-Louis, and moments later, Pinto won by an identical score at No. 5 to make it 4-2 CSI.

In what amounted to the clinching flight, Hwang scored a hard-fought, 7-5, 6-3, winner over Naeem to clinch victory for the Dolphins.  Hunter did not choose to go quietly scoring big wins at the Nos. 2 and 3 flights to make the final score, 5-4.

CSI’s next stop will be a road test against Brooklyn College on Monday, April 6, at 1pm at the Brooklyn Tennis Courts.