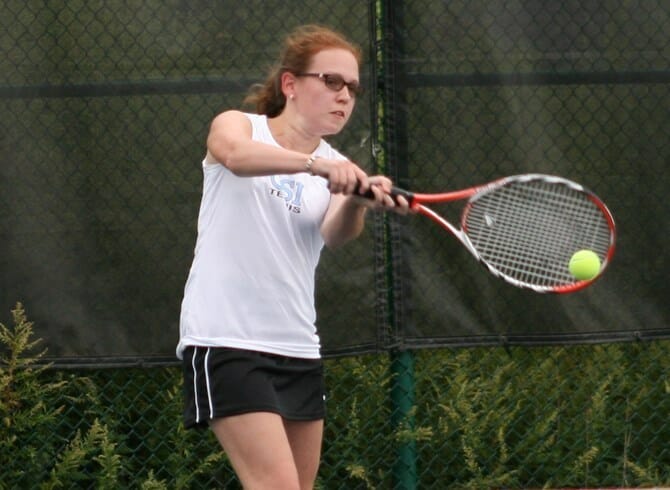 The College of Staten Island women’s tennis team scored their first victory as part of spring competition, posting a 6-3 win over Purchase College as part of play this afternoon in Purchase.  CSI improved to 12-4 overall, while Purchase fell to 3-7.

The Dolphins were up-against-it early, battling the cold air and forced to play with just five players.  The incomplete roster saw CSI concede the No. 3 Doubles and No. 6 Singles spots, so before play even began, Purchase was on top, 2-0.

When play did commence, the Dolphins were sharp and played well.  In Doubles, the top flight team of Nozima Toshpulatova and Michelle Kushnir scored an 8-4 win, and one rung lower, the duo of Sabrina Bragerton-Nasert and Madiha Mulla scored a decisive 8-2 win to make it 2-2 after doubles play.

That left the match open for the taking with five matches to play.  CSI would end up winning the top four flights to record the 6-3 win.  At the top spot, Toshpulatova scored an 8-1 win over PC’s Emma Yanel, and one notch lower, Bragerton-Nasert defeated Jasmine Rippey, 8-1.  Mulla won at No. 3 via an 8-1 win, and at No. 4 Kushnir got an 8-1 winner.

Making her 2015 debut, CSI’s Jonaldy Edouard was defeated at No. 5, but looked sharp promising in a loss to PC’s Hannah Yousef, 8-1.

CSI’s next spring match will be on Sunday, when they face Yeshiva University at 1pm at the CSI Tennis Center.