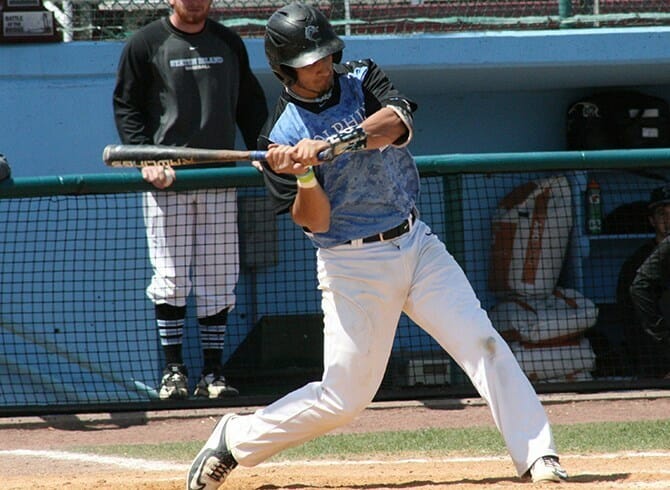 The College of Staten Island took on Farmingdale State this afternoon and lost 9-7 in a back-and-forth 9-inning thriller.   The Rams improve to 14-13 with the win while the Dolphins fall to 18-10 overall.

The Dolphins scored four quick runs in the first inning on just two hits thanks to two consecutive errors by the right fielder.  Staten Island was able to achieve this as lead-off hitter Elijah Rodriguez walked but was able to successfully steal second and advance to third on a wild pitch.  Nick Delprete who has been hitting well all season was thrown out at first but scored Rodriguez for the first run of the game.

Frank Muzzio scored the lone run for the Dolphins in the third inning with a solo homerun to right center to keep the Dolphins up 5-2.

The Rams evened the score up at 5-5 in the top of the fourth with a three RBI triple to right center after Josh Bernstein walked and hit a batter to put them on the bases.  The Rams would leave the fourth inning with a one run lead.

Rodriguez hit a 2 RBI homerun, his fourth of the season, over the center field wall in the bottom of the fourth to put the Dolphins back ahead of the Rams by one run.

The Rams tied the game up a seven apiece in the very next inning when Reilly, who went 2-for-2, hit a deep double to center field and advanced to third on a wild pitch to put him in scoring position.  Lombardo came to the plate and hit a deep fly ball to left field for the sacrifice fly to bring home Reilly for the only run of the inning.

Farmingdale would seal the deal in the seventh inning with bases loaded a wild pitch would bring in the winning run followed by Sulllivan successfully stealing home for the second run of the inning.

The Dolphins are back in action on Saturday, April 25 when they travel to Randall’s Island to take on City College of New York for their final CUNYAC doubleheader of the season.  If the Dolphins sweep, CSI will be crowned CUNYAC regular season champions and will head into the playoffs with the number one seed.