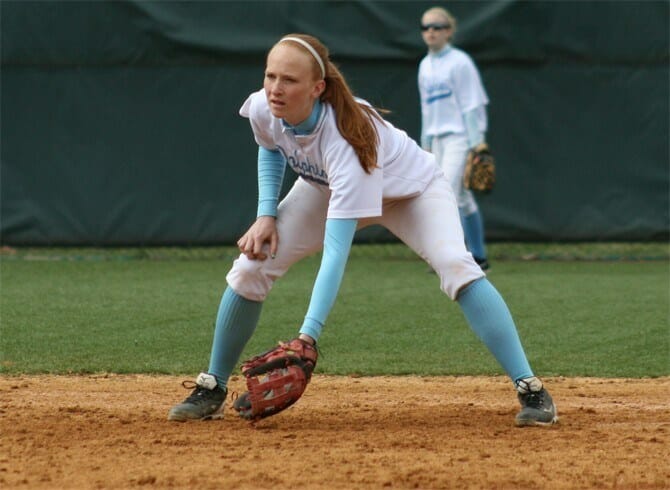 The College of Staten Island women’s softball team continued their winning CUNYAC tear, exploding by Baruch College in a doubleheader at the CSI Softball Complex.  CSI was playing as the visiting team on its home field, and scored 11-0 and 22-0 victories, improving to 19-7 overall and 9-1 within the CUNYAC conference.  Baruch fell to 3-17, 3-9, respectively.

It was all CSI from start to finish today, as the Dolphins rode great pitching and hitting to victory.  In the opener, Jacqueline Cautela threw a complete game shutout, surrendering only a lone hit in the game, fanning six batters.  Meanwhile, CSI got all the scoring they needed in the second inning, when Danielle Locke scored on a Kristy Colangelo single.

CSI tallied four more runs in the third to take a more commanding lead. Christina Tufano advanced Brittany Smith for a run, and then came in as well on a Locke single as well.  Chyanne Gilliam notched in a run in the sixth, and then CSI did the rest of its damage in the sixth, scoring five more to make it 11-0, highlighted by Locke’s RBI-double.  The Dolphins out-hit Baruch 13-1 and the game was shortened after six innings of play.

Game two was halted after just five innings, as Nicolette Trapani earned the win tossing a one-hit shutout, striking out 11 batters.  Meanwhile, CSI benefitted from a whopping 15 walks in the second contest, plating four runs in the first, 9 in the second, eight in the third and one more in the fourth.  Brittany Smith went 4-6 with four runs scored, and Maxine Jasko also scored four times.  Giana DeCesare went 1-2 with three walks in the game.

CSI is back in action tomorrow, when they play John Jay College at 12 Noon at the CSI Softball Complex.  Like today’s games, CSI will be the road team despite playing on their home field.  Should the Dolphins win both games tomorrow, they will clinch the CUNYAC Regular Season Championship.