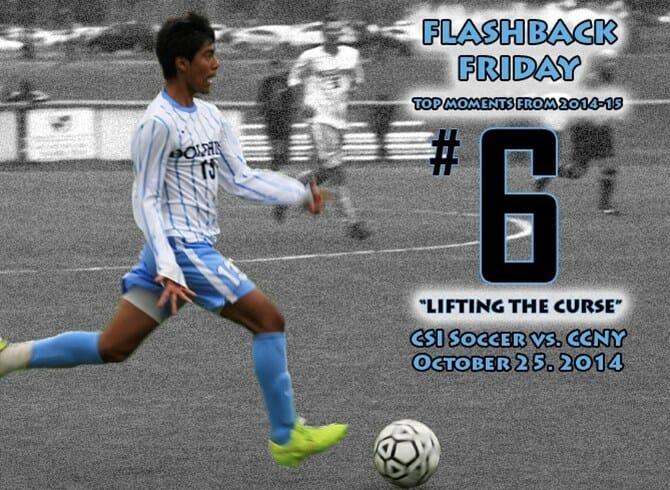 Flashback Friday looks at the top moments from the 2014-15 athletic year at the College of Staten Island.  This week we reflect on the 6th-highest moment of the past year, when the CSI Men’s Soccer team scored a monumental road win over City College of New York to clinch their first CUNYAC Regular Season Championship since 2003.

#6 – Men’s Soccer – Historic Win Clinches CUNYAC Championship
Date:  October 15, 2014
Who:  CSI Men’s Soccer vs. City College of New York
Where: Randall’s Island – Queens, NY
What Happened:  CSI took to the field on October 25 against the Beavers of CCNY with plenty at stake but with history hardly on their side.  The game would determine the CUNYAC Regular Season Championship, something CSI hadn’t been able to do since 2003, and what CSI failed to do a few days earlier against Hunter College. The last time the Dolphins beat the Beavers anywhere but on Staten Island, however, was in 1978, a 1-0 CSI win in what was then the first game ever between the two sides.  Despite setting the pace most of the way, the ghosts of soccer past seemed to keep CSI off of the scoreboard, including a play in the 29th minute, when a Nermin Kurtesi shot rocketed off of the post.  The Dolphins, however, would not let up, and in the 39th minute, a Daniel Tsygankov through-ball found open freshman Aldair Ramirez, and the midfielder raced in and put a shot passed CCNY keeper Maxwell Berkow to give CSI the 1-0 lead.  From there, it was CCNY’s turn to amp up their offensive challenges, and CSI keeper John Gioeli made a pair of second half saves to wrap up the win.  The win broke up a 19-game winless streak on the road against CCNY (0-17-2), a run that included five games played on neutral sites, and gave CSI their first CUNYAC Regular Season title since 2003, when the team finished 7-0-1 in CUNY.  CSI finished 6-1-1 in 2014 and defeated Medgar Evers four days later in tournament play before falling to eventual-champion Baruch College in the tournament semifinals. Looking back…with Aldair Ramirez
By the time the game against CCNY was played the team was starting to play a lot better over that stretch.  What was the reason for the team playing so well at that time?  The reason the team started to play better was because everyone was on the same page. It started from the training ground.  Tthe intensity and drive were there, which then was transitioning to the games. Our coach John had a plan, our jobs was just to execute it.

What kind of responsibility is it to be both a freshman trying to get better while also being an everyday starter? Many of my responsibilities as a student athlete are correlated with each other. In order to play you need a certain average, but I like to challenge and maintain a higher average than expected. There are a lot of great players on the team, so if I don’t keep with what the team expects I can easily be replaced. Consistency and hard work are key.

The team knew going into that game that it would determine the Regular Season Championship.  Did it take on any added significance for you personally or for the team in general? Personally I went in to the game knowing it would be one of our biggest game of the season. I was nervous and my adrenaline was pumping As a freshman it was my first taste of winning my first title with the team. As a team there was no bigger motivator than clinching the CUNYAC regular season title for CSI which hasn’t won it since ’03, being the number one seed in the CUNYAC tournament and knowing that we couldn’t pull it off the game before against Hunter. We were also missing a piece in our line up our captain Alfonso, it was his last year playing. So we wanted him to go out with a bang.

Tell us a little about the goal you scored. What exactly happened that put you in a breakaway position?  What I remember from the goal was that the play was building up on the left side, so I had to go and support. I saw Danny put the ball in the box and I just tapped it in. On the day of the game our coach John was trying a new formation from our regular 4-4-2 to a 3-5-2. The new formation was making me play as a winger rather than a typical right back . I had to move up, and attack more, when it came defending, we had to be four in the back again.

What was it like to score your first career goal and the game-winner in the most important game of the season to that point?  First off, it was a team effort. Everyone was on the same page and we were motivated and focused. We were the better team and we created the better chances. I was just happy and excited to have scored one of the many chances we had and my first goal for CSI.

What are some of the things you took away from the 2014 that you feel will make the team better going forward?  What I take away from this 2014 season and what will help us move forward, was that it all starts from the training ground.  The intensity and focus has to be there from every single player and it needs to transition to the games. Without the help of our coaching staff John Tardy, Chris and Alex Cuba nothing would be possible, they’re great coaches and we learn a lot from them.