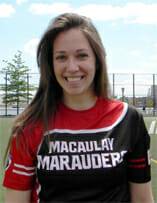 Jenna Jankowski has accomplished a great deal during her Macaulay career, but developing and leading the college’s first athletic organization is one of her most influential achievements. The Macaulay Marauders quidditch team includes 40 students from all 5 boroughs who have traveled extensively together to compete, and has twice advanced to the World Cup.

Jenna’s studies focus on Dramatic English Literature and Corporate Communications and have taken her abroad several times. In London she studied contemporary British drama and in Amsterdam she gained a comparative understanding of how liberal policies effect everyday life.

A Dean’s List scholar for all four years at Macaulay, Jenna is also the recipient of the Macaulay Legacy Award. The Staten Island native has been selected to take part in the Edward T. Rogowsky CUNY Washington D.C. internship program and will be interning for Congresswoman Carolyn Maloney.