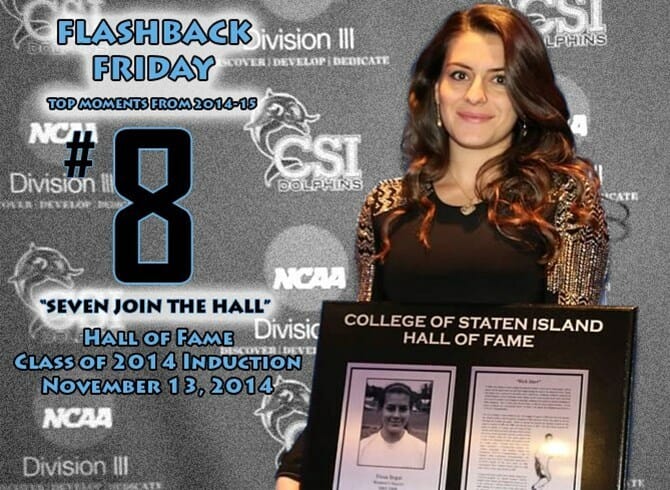 Flashback Friday looks at the top moments from the 2014-15 athletic year at the College of Staten Island.  This week we reflect on the 8th-highest moment of the past year, when CSI inducted its second class of honorees to its Athletic Hall of Fame.

#8 – CSI Athletics – Seven Honored in Class of 2014
Date:  November 13, 2014
Who:  College of Staten Island Hall of Fame
Where:  Grand Oaks Country Club
What Happened (click links for highlights):  CSI inaugurated its Athletics Hall of Fame in 2012 by honoring an initial class of seven honorees that same year.  The department doubled the effort again two years later, by placing seven more into the hallowed Athletics Hall of Fame with a rousing ceremony on the evening of Thursday, November 13.  At the beautiful Grand Oaks Country Club in Staten Island a collection of five former athletes and a pair of standout coaches received their due in a ceremony attended by over 180 participants.  Hosted by HOF Committee Chairperson and CSI Associate Athletic Director David Pizzuto, the ceremony featured welcoming words by Athletic Director Charles Gomes and CSI President William J. Fritz, and then was followed by presentations to celebrated student-athletes Nicole Estrada (Women’s Basketball), Fiosa Begai (Women’s Soccer), William J. Hodge (Men’s Track & Field), Rob Roesch (Men’s Basketball) and Kevin Crombie (Men’s Baseball), and legendary head coaches (Fran Hirschy (Men’s Baseball) and Bruce Knittle (Men’s & Women’s Tennis).  The CSI Athletics Hall of Fame is featured within the Sports & Recreation Center, on the bridge overlooking the Main and Auxiliary Gymnasia. Looking back…with Kevin Crombie
What was your initial reaction when you found out you were a part of the Hall of Fame Class of 2014?  My initial reaction when I heard the news that I was being inducted into the Hall of Fame Class of 2014 was shock and also I was extremely honored.  Staten Island has such a rich tradition of fine baseball and just being considered was an honor but actually being the first baseball player to be chosen was overwhelming.  After receiving the call I first notified my father who was thrilled, I then found myself reflecting quite a bit about the great CSI Dolphins baseball teams I was fortunate to be a part of in the early 1990’s.

Having a chance to be honored alongside your former head coach, must have been special, tell us a little about your experience working under Fran Hirschy?  Being honored alongside my former head coach Fran Hirschy meant the world to me. He is one of the main reasons, if not the main reason, why the team and myself as a pitcher reached the heights we did.  At that specific point in time at CSI there was a group of very good ballplayers assembled and Coach Hirschy was the perfect Manager to lead us.  He was about as dedicated as a Coach could be.  He was extremely tough, hardworking and intelligent and he expected his players to practice and play the same way.  He was not fancy – he would hammer us over and over on the fundamentals of the game and no leader I have ever seen knew how to motivate greater than he did.  Frankly, it would have felt strange to me if he was not honored that evening – it made the night even more special for me.

You were a dominating submarine style pitcher in the early-1990’s.  You don’t see a lot of pitchers with your delivery.  Where did you learn to throw that way?  My submarine style of pitching came about quite logically.  When I was in my early teens, I developed quite a unique sweeping breaking ball that I threw from the side / submarine position.  It was quite a weapon during sandlot games and stickball matchups.  As I got more involved with organized baseball I realized that this was my “out” pitch so I adjusted all of my pitches to be released from the exact same arm angle.  Like anything else, it took many years of practice and refining to get me to the point where it was good enough for college and pro ball.

During the ceremony you spoke a lot about your time at CSI and what it meant to you.  How special of a moment was it in your life?  The Hall of Fame ceremony was very special to me and my family.  It was also very special to every member of those early 1990’s CSI Baseball squads.  It was a night that I felt we were honored as a team for our hard work and for our great successes.  It was special to me because many young men play organized baseball but very few get to be part of such a special and successful program in their lifetime.

Tell me a little about the ceremony itself.  Was it what you envisioned it would be?  How enjoyable of an experience was it for you? The Hall of Fame ceremony was beautifully done. It was well organized, classy and memorable.   The amount of work and organization that must have gone into this event is mind blowing. I truly appreciate the efforts of all those that had a part in making that night so special for the attendees. It truly was one of the most special nights of my life.