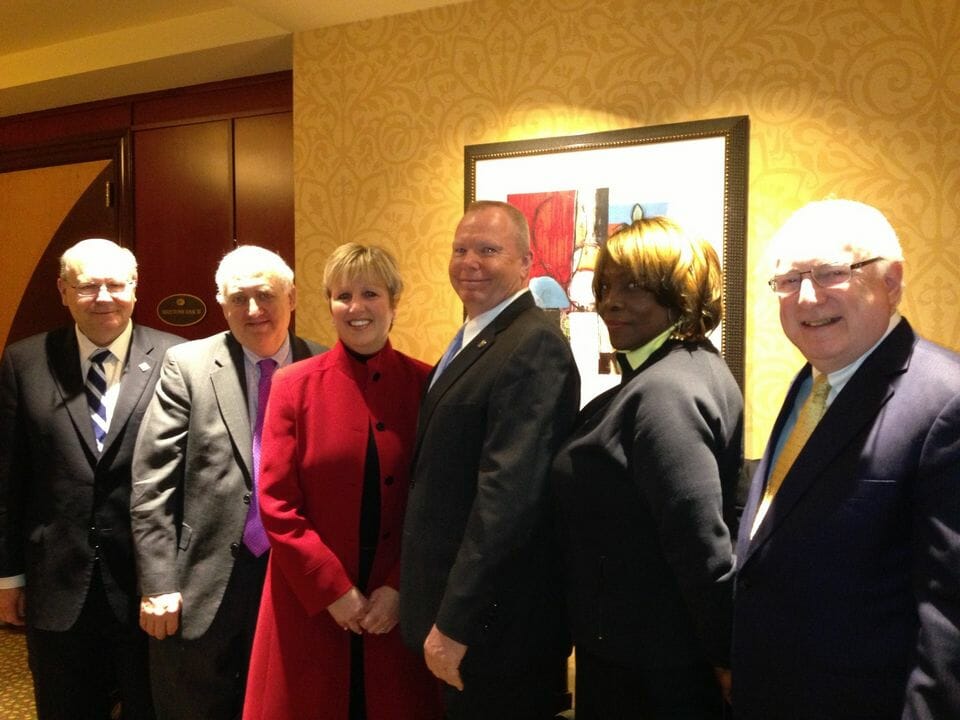 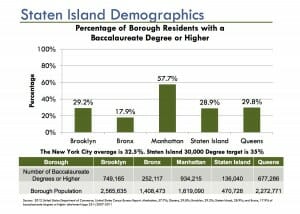 CLICK TO ENLARGE: A graphic provided by the 30,000 Degrees initiative shows Staten Island places next to last among the five boroughs in the percentage of residents with a baccalaureate degree or higher.

STATEN ISLAND ADVANCE — Strike up a conversation with the guy ahead of you at any supermarket checkout on Staten Island and odds are he didn’t go to college.

Neither did the construction foreman who lives next door, or the young woman around the corner who works on Wall Street.
They’re among the overwhelming majority of Staten Islanders – 71.1 percent – who don’t hold college degrees.

Only 136,040 of the borough’s 470,728 residents are college graduates with a baccalaureate or higher, according to the latest census data. Those numbers place the borough next to last in the percentage of college-educated residents; only the Bronx has fewer.

“The reason I hear the most often is people say, ‘My father, my grandfather, my great-grandfather worked for the police or fire [departments] and they rose up through the ranks without college,'” said William Fritz, president of the College of Staten Island, Willowbrook. “But they don’t realize the world has changed, and this is no longer possible.”

“There is a myth that you don’t need a college degree to succeed in the new global economy,” echoed Richard Guarasci, president of Wagner College, Grymes Hill.

“Staten Island has always been very strong in civil service and construction,” added James O’Keefe, vice provost of St. John’s University, Grymes Hill, the son of a plumber and a homemaker and the first in his family to go to college. “Young people see their parents doing very well in those fields, and figure, ‘I don’t have to go to college either.'” 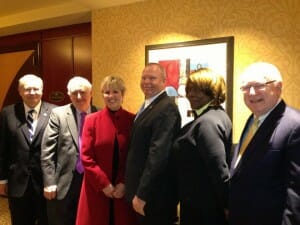 Fritz, Guarasci and O’Keefe have formed a consortium with the ambitious goal of increasing the number of college-educated Staten Islanders by 30,000 within the next 10 years.

Dubbed 30,000 Degrees by 2025 and modeled after a program in Kentucky, the initiative aims to build and support a college-going culture at the high school level and all the way down to pre-kindergarten, especially in lower-income areas and immigrant communities where college seems unattainable, unaffordable and even unnecessary.

While the Island’s three college leaders are tasked with building enrollments on their own campuses, they insist their goals are much broader, with Staten Island’s future and greater good as top priorities.

In communities with a strong number of baccalaureate degrees, birth rates are higher and citizens are more likely to vote and be civically engaged, the consortium said, citing national statistics. Higher-paying companies are eager to set up shop, and college-educated workers are more eligible for promotions and better prepared for retirement.

Increasing the number of Staten Islanders with college degrees will create a better educated, work-ready community that is attractive to new businesses and an excellent place to live, work and learn, the college leaders said. For this reason, 30,000 Degrees has won support from the Staten Island Economic Development Corporation.

GOOD JOBS FOR THE COLLEGE EDUCATED

The value of a college degree has been increasing since the economic recovery began five years ago, according to a study by Georgetown University. Good jobs are back and college graduates are first in line, the study shows.

A “good job” pays at least $53,000, tends to be full-time and provides health insurance and a retirement plan, according to the study. Of the 2.9 million good jobs gained since the recession, 2.8 million have gone to college graduates.

On average in 2013, Americans with four-year degrees earned 98 percent more per hour than people without a degree, which is up from 64 percent in the 1980s, according to data published by The New York Times.

“If we want the high-tech jobs here, we need an educated work force here” on Staten Island, said CSI’s Fritz, who wants to see more lucrative job opportunities on Staten Island so young people don’t need to go to Manhattan or New Jersey for them.

Fritz said CSI soon plans to make college classes easily accessible to those who commute to Manhattan by offering them at 120 Stuyvesant Place in St. George, the former site of Richmond College, a CSI predecessor that is steps away from the ferry terminal.

“Get off the ferry and take a class” will be the incentive, he said.

Educating young people about the range of financial options that make college a worthwhile investment is an equally important mission for the consortium, Fritz said.

Staten Island’s three colleges illustrate the range of choices in higher education, he pointed out, adding that “there is no reason for any student in any society to say they can’t afford to go to school. Anyone from the lowest income level can afford college.”

The strapping 17-year-old with an easy smile has two more years to go before he can enroll in a baccalaureate program for child psychology, the career he dreams about. But there is no doubt a college degree is in his future.

Pedro was one of two dozen Port Richmond students who earlier this month completed a summer session at Wagner College called the Port Richmond Partnership Leadership Academy, a springboard for 30,000 Degrees.

He spent five weeks at Wagner, two of them dorming in Room 811 of Harbor View Hall. He took college-level courses in math and science and traveled to Washington, D.C., for tours of the Newseum and the war memorials. He interacted with faculty members and soaked up life on a college campus.

The son of hardworking parents without college educations, Pedro said college doesn’t intimidate him anymore and he’s ready to be the first in his family to earn a degree.

“I know there will be ups and downs, but I’ll get through it like everything else. And I know you need college to get a good job,” the Mariners Harbor teen quickly added.

Mary Onifade, who will be a senior at Port Richmond High School next month, completed her second year in the three-year Leadership Academy. The eldest daughter of college-educated Nigerian immigrants, Mary has known all along that college was part of her future.

“My mom always tells me, ‘Knowledge is power,'” she said.

The question for Mary is which college, and the Leadership Academy has helped her sort that out this summer with visits to Vassar College, Rutgers University, Brown University, Princeton University and Boston University. She’s looking at pre-med programs, with plans to be a surgeon.

“If every college would partner with schools of need and use faculty and other resources, think how much better our city, our country, would be,” Guarasci said. “Young people succeed when someone believes in their dreams. You’ve got to start early” to nurture a college-bound focus.

“It’s about changing the conversation from ‘I don’t need a baccalaureate, I can do just fine,'” said Fritz, “to ‘In this day and age, obtaining one is a sure-fire way of moving up the ladder.'”

“Staten Island is the only borough where I would try this” initiative, O’Keefe said. “People work well together here. With Cesar Claro [of the SIEDC] and the borough president’s office, all our ducks are lined up to make a run for this. We’ve got the arrow moving in the right direction.”

This article by Claire M. Regan was first published by the Staten Island Advance and SI Live on August 23, 2015 and is reprinted here with permission.