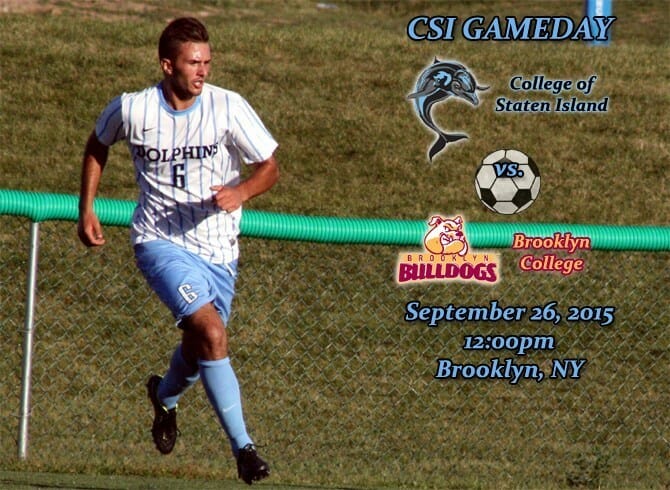 The College of Staten Island men’s soccer team has won its last three games after dropping their first six, and is now boasting a 2-0 CUNYAC mark after a lopsided win over Medgar Evers. The Dolphins are back in action today with another road CUNYAC test, this time against Brooklyn College, in Brooklyn, NY.

CSI vs. BROOKLYN COLLEGE AT-A-GLANCE
Matchup:  CSI (3-6 overall, 2-0 CUNYAC) vs. Brooklyn College (3-3 Overall, 1-0 CUNYAC)
Where:  Brooklyn College, 2900 Bedford Avenue, Brooklyn, NY
Kick-Off: 12:00pm
All-Time Series:  CSI leads, 17-8
Last Year’s Result:  CSI won 3-0
Players To Watch (CSI):  Seven different goal scorers scored for CSI, including another two for junior Marcin Klim, who now has six on the season for the team lead.  Goalkeepers Daniel Raffo and John Gioeli combined for CSI’s first shutout of the season on Wednesday.  In last year’s meeting, Gioeli made five saves in CSI’s shutout win against Brooklyn.
Players To Watch (BC): BC is being paced this year by Kenny Benitez, who leads the team with three goals on six shots.  Look for Valentyn Kharko to be an offensive catalyst as well.  He leads BC with 24 shots taken, far and away the most on the team.
News and Notes:  CSI has won the last two, and six of the last 9 meetings in the series.  The Dolphins also boast a very good record against Brooklyn on the road, having beaten the Bulldogs seven out of 9 times.  The last time Brooklyn defeated CSI at home was way back on October 18, 2000.  In last year’s contest, Ilir Papraniku and Nicholas Bacarella tallied for the Dolphins in what was a 3-0 win at the CSI Soccer Complex.