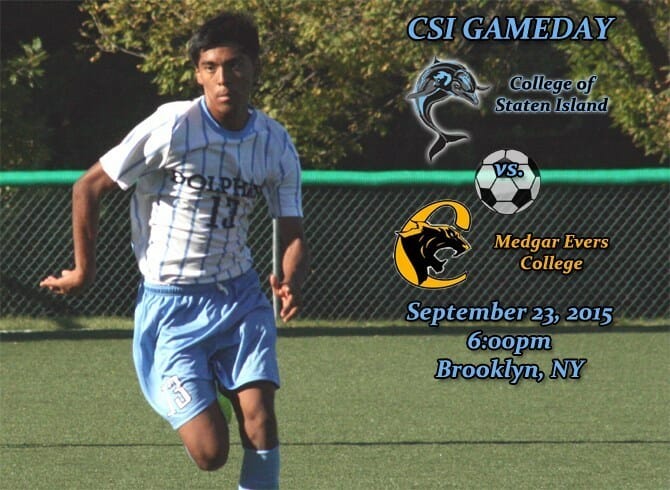 The College of Staten Island men’s soccer team has won its last two games after dropping their first six, and introduced the CUNYAC portion of their season with a 3-2 overtime win over defending champion Baruch College.  The Dolphins are back in action this evening with a game under the lights of Aviator Field against Medgar Evers College, hoping to make it three in a row.

CSI vs. MEDGAR EVERS COLLEGE AT-A-GLANCE
Matchup:  CSI (2-6 overall, 1-0 CUNYAC) vs. Medgar Evers College (2-5 Overall, 1-0 CUNYAC)
Where:  Aviator Field, 3159 Flatbush Avenue, Brooklyn, NY
Kick-Off: 6:00pm
All-Time Series:  CSI leads, 22-14-1
Last Year’s Result:  CSI won both meetings, 1-0 & 5-1
Players To Watch (CSI):  Junior Marcin Klim has come off of the bench to dump in three goals in the last two games, including the game-winner in overtime against Baruch on Saturday and was named CUNYAC Player of the Week.  Freshman Tarek Emam is also packing a powerful punch in the middle with his long-range shooting.
Players To Watch (MEC): Zeakial Daley has been on fire for MEC, scoring four goals in the last two games for MEC, including all three for the hat trick over St. Joseph’s College in their last outing, a 3-2 win.
News and Notes:  Both teams have gotten off to similar starts.  Both have won a pair of games, including their CUNYAC opener after poor starts.  CSI started 0-6 and MEC 0-5.  The teams share one common opponent thus far, with both falling to Farmingdale State.  CSI lost, 4-2, and MEC suffered a 7-0 defeat.  CSI has won the last four meetings in the series dating back to 2012, including a 5-1 win in the CUNYAC Postseason Quarterfinals last year.