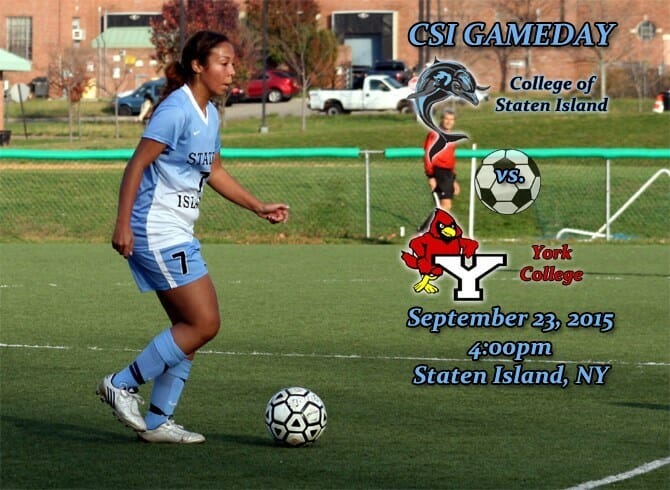 The College of Staten Island women’s soccer team is coming off of a tough CUNYAC loss to Lehman College, and will look to turn the tide against York College this afternoon in continued CUNYAC action at the CSI Soccer Complex.  CSI SportsNet will cover the action beginning at 3:45pm.

CSI vs. YORK COLLEGE AT-A-GLANCE
Matchup:  CSI (5-2 overall, 1-1 CUNYAC) vs. York College (2-3 Overall, 1-1 CUNYAC)
Where: CSI Soccer Complex, 2800 Victory Blvd., Staten Island, NY
Kick-Off: 4:00pm
Live Video:  www.csidolphins.com/CSISportsNet
All-Time Series:  CSI leads, 6-0
Last Year’s Result:  CSI won, 6-0
Players To Watch (CSI):  Danielle Alexandrini was the lone goal-scorer in the game against Lehman on Saturday, and is now up to 9 goals on the season.  The senior needs two more for tie former Dolphins Tina Chechel, Daniella Otaiza, and Fiosa Begai for 10th on the all-time single season list.
Players To Watch (YC): York’s two wins and all 21 of their goals this season were scored in a pair of lop-sided wins against Medgar Evers.  In those two games, Kennisha Wills notched 9 goals and an assist, while Estefany Delgado notched five goals and two assists.  Look for them to try and lead YC today.
News and Notes:   CSI saw their 25-game CUNYAC Regular Season unbeaten streak snapped on Saturday, but will look to preserve their perfect all-time record against York this afternoon.  CSI has won all six previous meetings by a combined, 33-0.  It’s been feast or famine offensively for York this season.  The Cardinals have outscored opponents, 21-0, in its two wins, but have been outscored, 16-0, in its three losses.