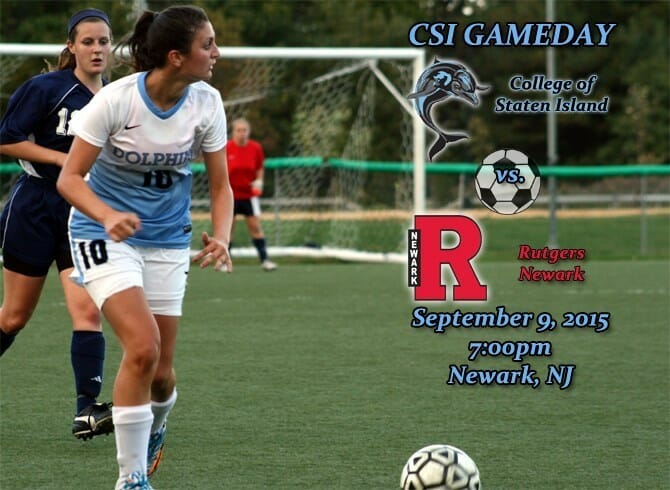 The College of Staten Island women’s soccer team is off to an undefeated start to the 2015 season, and will be looking to keep the roll going against Rutgers – Newark under the lights tonight in Newark, NJ.  The Dolphins are coming off of a doubleheader sweep this weekend over Sussex CC and Old Westbury in their 4th Annual Fall Classic at CSI.

CSI vs. RUTGERS-NEWARK AT-A-GLANCE
Matchup:  CSI (3-0 overall, 0-0 CUNYAC) vs. RU-Newark (2-1 overall, 0-0 NJAC)
Where:  Alumni Field, Hackett Street, Newark, NJ
Kick-Off: 7:00pm
Live Video:  http://www.rutgersnewarkathletics.com/watch/?Live=115
All-Time Series:  RU-Newark leads, 3-1
Last Year’s Result:  RU-Newark won, 4-1
Players To Watch (CSI):  Danielle Alexandrini is off to a rocket start in 2015, scoring five of the Dolphins’ eight goals to open the season.  Senior Samantha Wysokowski has assists in back-to-back games and hopes to be an offensive catalyst tonight.
Players To Watch (RU):  Juliana Ceballos is leading the way for RU with eight shots and has scored two of RU’s four goals this season.  Diana Carvalho has played every minute in goal for the Raiders this season, and has made eight stops through three games.
News and Notes:  CSI had their hands full last year against the Scarlet Raiders, as they were out-shot, 24-7 (14-3 on goal), as RU scored three second-half goals to break the game open, 4-1.  Wysokowski was the goal scorer for CSI last year but was injured in that game and missed the rest of the season.  The Raiders were selected to finish 6th in the NJAC Preseason Poll, and sport a 3-1 record against CSI at home since the team’s first met back in 2005.  CSI has won its last five road openers to start a season.