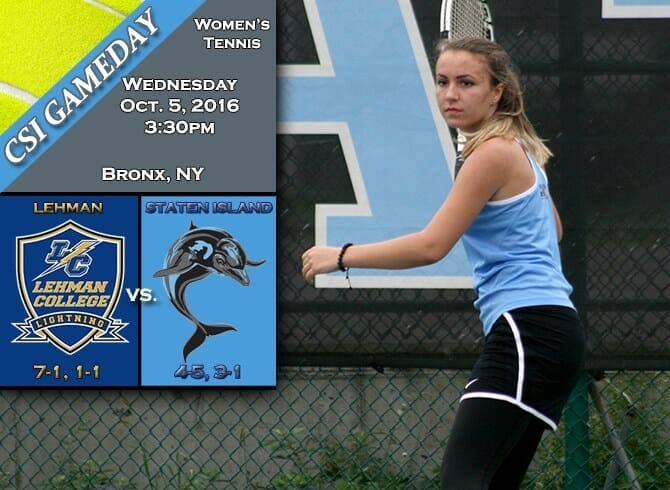 CSI vs. LEHMAN COLLEGE AT-A-GLANCE
Matchup:  CSI (4-5 Overall, 3-1 CUNYAC) vs. Lehman College (7-1 Overall, 1-1 CUNYAC)
Where: Lehman College – 250 Bedford Park Boulevard West, Bronx, NY
First Serve: 3:30pm
Last Year’s Result:  CSI won, 7-2
Players to Watch (CSI):  Freshman Diana Sanchez has had a solid debut for the Dolphins since being added a week ago to the roster.  She picked up her first win of the season in singles yesterday and it was in the position to win the match over John Jay, 5-4.  Two-time defending CUNYAC Rookie of the Week Tristiana Adragna continues to stay host, having scored another win yesterday to run her record up to a team-best 6-3.
Players to Watch (LC): Statistics Unavailable
News and Notes:  The Dolphins have had the better in the series in recent years but the Lightning are having a terrific season and are 7-1 overall.  The two teams share two common opponents this year with both teams going 2-0 against Sarah Lawrence College and Brooklyn College.  Both teams also fell to Baruch College, representing the only CUNYAC loss so far for both teams.  Right now CSI is in a second place tie with John Jay (whom they just defeated head-to-head), while Lehman is behind both of them at 1-1 with two matches in hand.  The top six CUNYAC schools make the postseason playoffs.