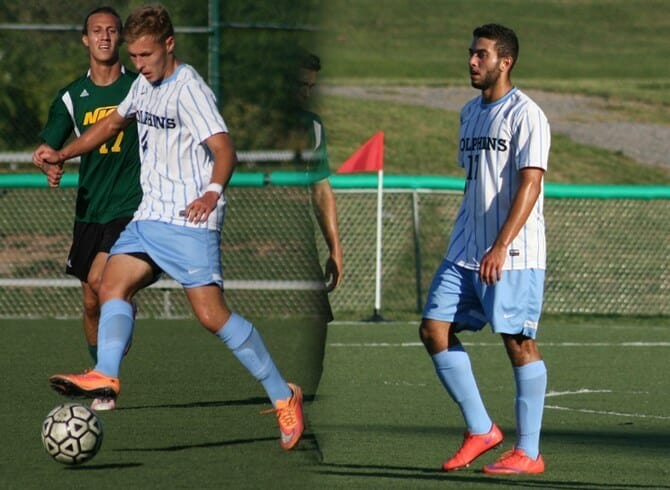 After a 2-0 week for the College of Staten Island men’s soccer team, a pair of weekly honors was bestowed to the Dolphins by the City University of New York Athletic Conference.  Junior attacker Marcin Klim was awarded CUNYAC Player of the Week honors while freshman Tarek Emam garnered Rookie of the week laurels.

Klim was certainly the goal-scoring centerpiece to the Dolphins’ attack this week.  As a reserve player in each game he packed a powerful punch coming off of the bench.  Against NJCU on Wednesday, Klim came in during the closing moments of the first half, and his assist extended CSI to 3-0 right before the break.  Then, two minutes into the second half, Klim put a punctuation mark on the game with a goal of his own to make it 4-0.  CSI would ultimately prevail, 6-1.

Three days later, in the Dolphins’ dramatic, 3-2, overtime win, Klim scored the game-tying goal to make it 2-2 in the 57th minute, again scoring as a reserve.  The game moved into overtime and just two minutes into the frame, Klim raced in to score his second of the match, giving CSI the golden goal winner.

Freshman Emam had similar success working in the midfield.  His goal right before intermission against NJCU put CSI up 3-0, and Emam missed another would-be goal on a beautiful 30-yard shot later in the game.  He also introduced the scoring in the Baruch tilt, scoring in the 20th minute to give CSI a 1-0 lead.

?CSI will return to action on Wednesday, when they travel to Aviator Field in Brooklyn to take on Medgar Evers College at 6pm to continue CUNYAC play.  The Dolphins are 2-6 overall and 1-0 in CUNYAC play.