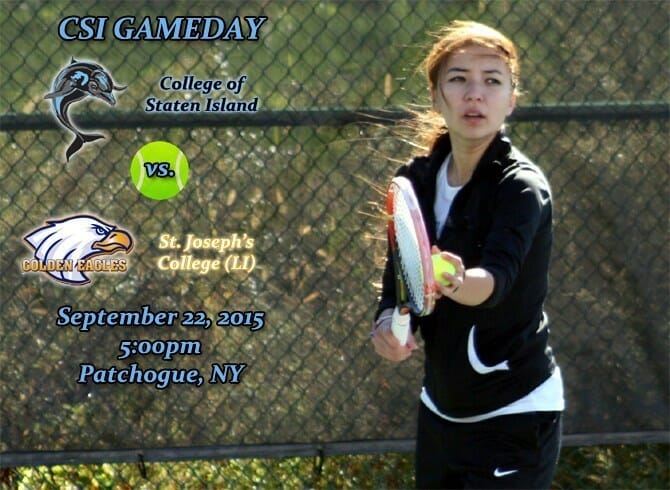 The College of Staten Island women’s tennis team is undefeated this season through five matches, and the team will look to keep the streak intact today, when they travel to St. Joseph’s College of Long Island at 5pm.  This match was originally scheduled for Thursday of last week but was moved to this afternoon.

CSI vs. ST. JOSEPH’S COLLEGE (LI) AT-A-GLANCE
Matchup:  CSI (5-0 overall, 1-0 CUNYAC) vs. St. Joseph’s College (LI) (3-1 Overall, 0-1 Skyline)
Where: St. Joseph’s College, 155 West Roe Blvd., Patchogue, NY
First Serve: 5:00pm
Last Year’s Result:  CSI won, 6-0
Players To Watch (CSI): Sabrina Bragerton-Nasert remains the catalyst for CSI and as the season goes, so does her winning streak as she stands 5-0 in singles and doubles play this season.  Madiha Mulla scored the game-winner over Farmingdale State last week and looks to build on that momentum.
Players To Watch (SJC):  Victoria Makulik is a freshman who is shining for SJC.  She has won her last three matches, including a play at No. 1 singles over Bard last week.
News and Notes: Last year CSI took a 6-0 victory.  CSI was awarded two points by default, scored two wins each in singles and doubles and the remaining flights were suspended due to darkness.  SJC is on a three game win streak after dropping their opener to Yeshiva, 6-2.  CSI also opened against Yeshiva this year, winning, 5-4.  That is the only common opponent the teams have shared this year.