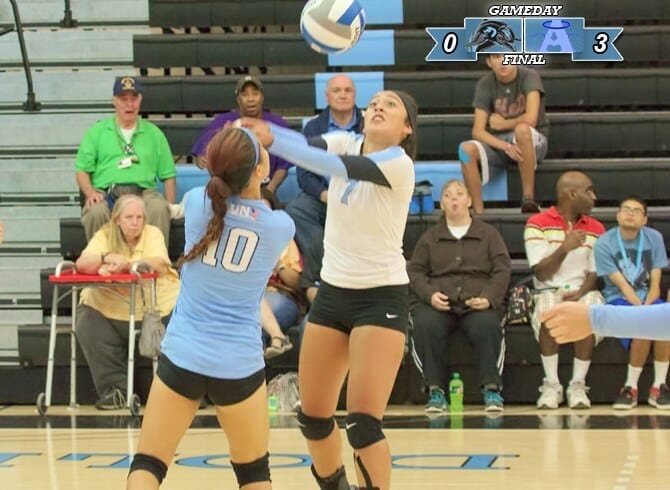 The College of Staten Island women’s volleyball team saw their three game win streak snapped on Thursday night, falling to the College of New Rochelle on the road, 3-0, as part of non-conference play.  Individual game scores were 25-15, 25-18, and 25-12.  CSI leveled to 5-5 overall on the season with the loss, while CNR upped their mark to 8-4.

CSI scored just two kills in the opening game and struggled at the front of the net, posting a -/273 hitting percentage.  CNR kept CSI off-balance with their service as well, as they finished with 24 overall in the game.  CSI improved in the second game, but for the entire match the Dolphins could only muster up 10 kills on 65 attempts, while the Blue Angels connected on 22 kills in 77 attempts.

Fabiola Padilla Rios finished with a game-high 9 kills for CNR alongside a heavy 9 service aces.  Tiany Lopez Soto led the way with 11 digs.  For CSI, Vanessa Reyes led the Dolphins with three kills while Brittany Minondo finished with a team-high 10 digs.

CSI’s next match will be on Tuesday, September 29, at 7pm, when they travel to face St. Joseph’s College of Long Island.