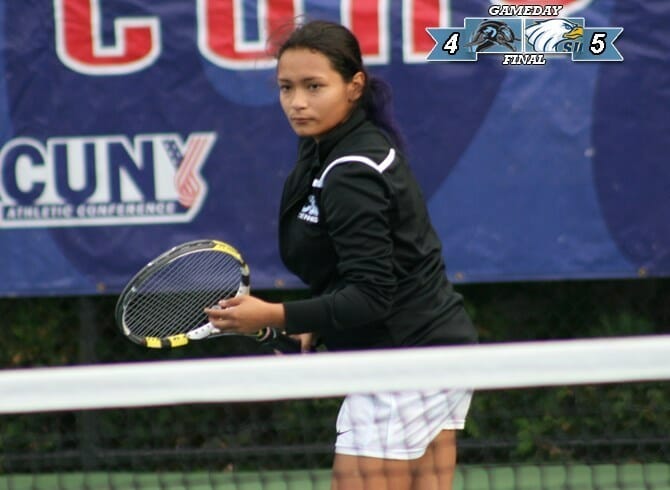 Playing without the services of one of their top players, the College of Staten Island women’s tennis squad fell for the first time in 2015, losing a close, non-conference, contest to St. Joseph’s College (LI) on the road, 5-4.  CSI fell to 5-1 overall, while the Golden Eagles won for the fourth-straight time, lifting to 4-1.

CSI was playing without Nozima Toshpulatova, a stalwart at the top of the lineup who was missed tonight.  Despite being short-handed, CSI still was able to take a 2-1 lead after doubles.  In the top spot, undefeated pair Sabrina Bragerton-Nasert and Madiha Mulla scored an impressive, 8-5 win, while one rung lower, the team of Samantha Mazier and Viktoriya Volkova outlasted SJC’s team of Kelley McGrath and Michelle Stanczak, 8-6.

In singles play, however, SJC proved too tough to handle, as only Bragerton-Nasert in the pole position and Michelle Kushner at No. 4 were able to take wins.  Bragerton-Nasert breezed, 6-2, 6-0, against Shannon Mercer, while Kushner muscled past Erika Heisenberg, 6-4, 7-5.  In a pivotal match SJC’s Victoria Malefic was able to get by Mulla at the No. 2 spot, 7-5, 6-3.

CSI will get right back to action tomorrow, when they face Hunter College at 1pm at the CSI Tennis Center.  The match is a rematch of last year’s CUNYAC Final, won narrowly by CSI, 5-4.