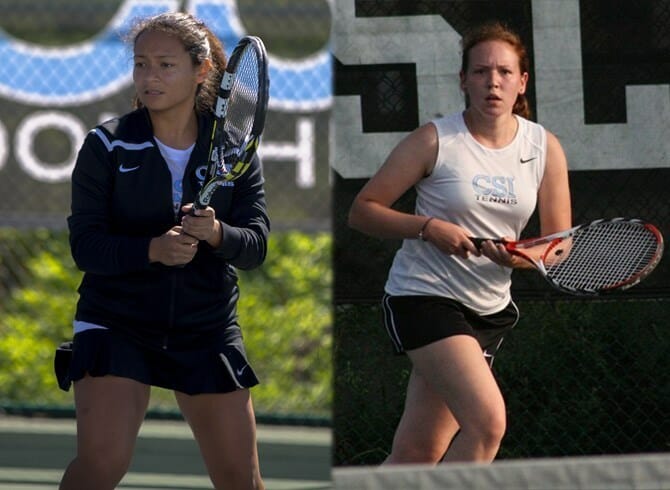 The College of Staten Island women’s tennis squad ran through a terrific regular season, and as they strive towards a third consecutive CUNYAC Championship attempt, the team received great tidings with two major awards as part of the conference’s all-star selections in 2015.  Senior Sabrina Bragerton-Nasert was given top-billing as the CUNYAC’s Player of the Year while junior Michelle Kushnir posted the conference’s Sportsmanship Player of the Year award.  Alongside the major award winners, senior Madiha Mulla and junior Nozima Toshpulatova earned on as first-team conference all-stars.

Having never missed a match in her collegiate career, Bragerton-Nasert is putting the finishing touches on a tremendous senior season.  Plating primarily the Nos. 1-2 Singles spots all year, Bragerton-Nasert posted a 14-2 singles record, and she earmarked the same 14-2 mark in doubles, all at the No. 1 position with four different Dolphins teammates.  Bragerton-Nasert ended the season on an eight-match win streak, running her career singles record to 59-14 all-time before CSI’s postseason run.  A three-year co-captain, she was the CUNYAC’s Sportsmanship Player of the Year winner a year ago.

“I am incredibly surprised and humbled,” said Bragerton-Nasert moments before CSI’s quarterfinal win over CCNY, 5-0, to kick off tournament play.  “This award truly puts in perspective how much hard work pays off. I spent four years training, never missed one match, and to receive this honor is not something I expected but I always wanted.  It is very exciting and is giving me so much more motivation to close out the season strong.”

Joining Bragerton-Nasert is junior Michelle Kushnir, an outstanding player who ran her singles record up to 10-2 this season after a win over CCNY yesterday, a mark that included a 6-1 mark at her usual No. 5 position.   Kushnir posted an 11-2 doubles mark as well, which included a mark of 7-1 at her usual No. 2 position.  The numbers pale in comparison to her conduct on the court, where she serves as an ambassador to the program.  Of the seven CUNYAC players nominated for the award, Kushnir came out on top as voted on by the CUNYAC coaches.

“It’s such an honor to receive the Sportsmanship Award,” said Kushnir.  “I have worked very hard this season to not only better my game, but I have also worked on keeping a positive attitude when the going gets tough.  I am grateful for the recognition the other teams have shown me.”

CSI also boasted two all-stars among the CUNYAC field of eight altogether.  Senior Madiha Mulla boasted an exceptional 11-3 mark in singles this season, adding an 11-3 mark in doubles with three different partners.  The reigning CUNYAC Tournament Most Valuable Player, spent most of her season at No. 3 Singles, earning a 9-1 record there.

Toshpulatova rounds out the selections for CSI.  She was the only Dolphins player this season to post an undefeated record in Doubles play, going 13-0 overall, including a 5-0 mark in the pole position.

CSI finished the regular season with a 13-3 overall mark and entered as the CUNYAC’s No. 2 seed in the postseason tournament by virtue of a 5-1 record.  CSI defeated CCNY in quarterfinal play, 5-0, on Friday, and host Hunter College on Saturday for the right to get to the Final on Tuesday at Queens College to face top-seeded Baruch College.