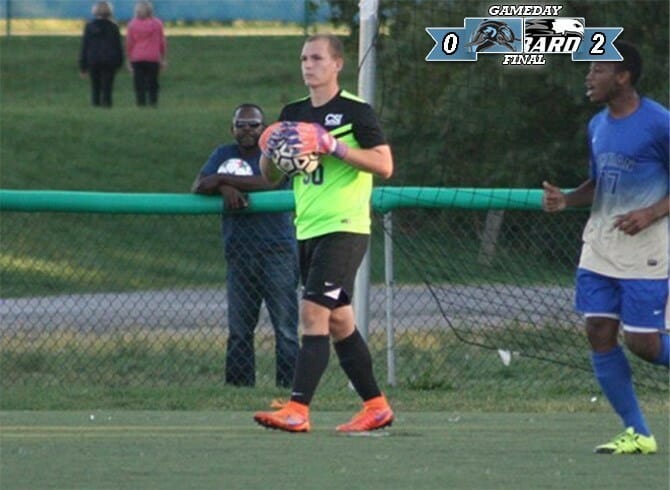 After their longest unbeaten streak since 1984, the College of Staten Island men’s soccer team will now go into the CUNYAC postseason on a two-game skid, dropping their regular season finale to Bard College by a 2-0 count as part of non-league play in Annandale-on-Hudson, NY.  CSI finishes the 2015 regular season with an 8-8-1 overall mark, while the Raptors improved to 6-8-1.

Statistically the game was a dead-heat much of the way, but a late first-half goal by Bard and then another 10 minutes later kept CSI at bay, as the Dolphins struggled to find quality chances and were kept off of the scoreboard.

CSI starting keeper John Gioeli made a pair of saves in the first half, but came out of the game in favor of Kyle Coffee at the 37:30 mark of the half.  That proved a turning point, as the Raptors got on the scoreboard in their first shot attempt against Coffey.  Nick Shenberger headed in a cross on a feeder from Tamak Chiba just 48 seconds later to give Bard a 1-0 lead.  CSI would out-shoot Bard 2-1 after that but neither would register on goal, and the Raptors secured a 1-0 halftime lead.

Bard came out of the second half gate firing on all cylinders and assumed the first four shots of the frame.  The final one in that string came at 48:24 as Shenberger was able to track down a loose ball in the box and fire the ball into the top shelf for a 2-0 edge.

CSI worked feverishly to get back in the game, and would muster five shots on goal, but Bard keeper Daniel Gagne was up to the task, preserving the shutout win.

For the game, Bard out-shot CSI, 19-17 (7-6 on goal), while corner kicks were even at 5-5.  Philip Lefkowitz led CSI with four shots.  Coffey made three saves in defeat while Gagne registered six in victory.

CSI will now be idle until the quarterfinal round of the CUNYAC Tournament.  The top-seeded Dolphins will face off against No. 8 Medgar Evers College at the CSI Soccer Complex at 3pm on Wednesday, October 28.