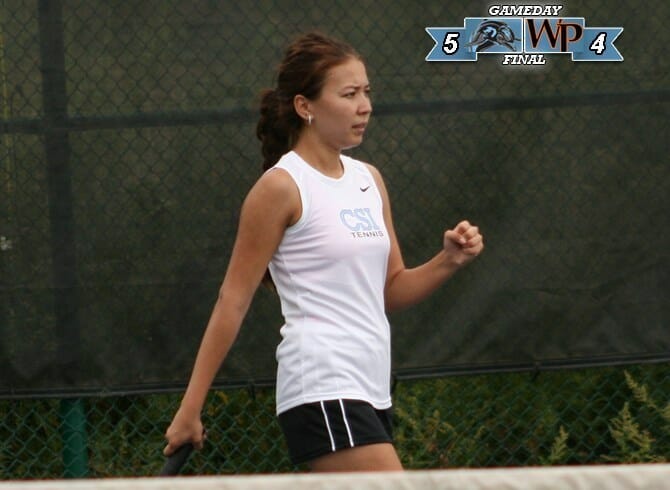 The College of Staten Island put an end to a two-game slip, surviving past William Paterson University by a 5-4 count as part of non-league play in Wayne, NJ.  The Dolphins, who had dropped three of their last four, lifted their overall mark to 7-3, while the Pioneers fell to 1-8.

Play started with doubles and the Dolphins were able to score a pivotal, 2-1, lead.  In the top-spot, Nozima Toshpulatova and Sabrina Bragerton-Nasert were able to score an 8-3 win over WPU’s Brittany LaBruna and Summer Bernales, 8-3.  On rung lower, the CSI duo of Madiha Mulla and Samantha Mazier paired up for the first time and scored a solid 8-3 winner over Brianna Boyd and Samantha Uribe.  WPU got the board, however, thanks to a win at No. 3, as Jessenia Fernandez and Jessica Papin-Yukhtanova, 8-1, over CSI’s Jonaldy Edouard and Guetanie Romain.

Up next for CSI will be a return to CUNYAC play, as the Dolphins will square off with Lehman College on Saturday at 1pm, before as trip to Rutgers-Camden on Sunday, also at 1pm.