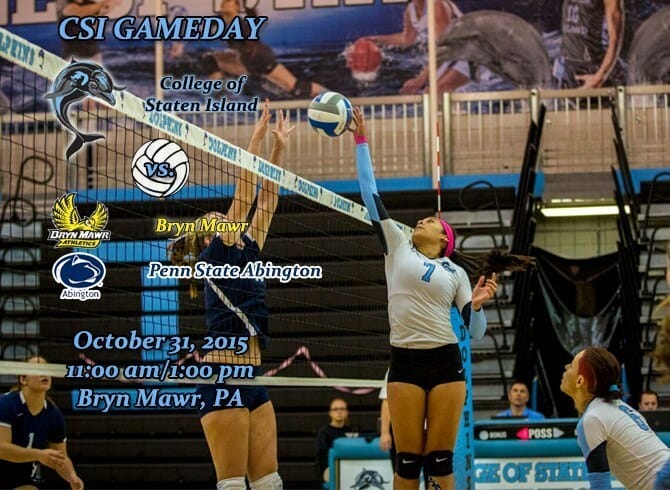 The College of Staten Island women’s volleyball team will head to Bryn Mawr, PA for a tri match today with their first match starting at 11:00 am followed immediately by a 1:00 pm match.

CSI vs. BRYN MAWR AND PENN STATE ABINGTON AT-A-GLANCE
Matchup: CSI (8-12 overall, 3-4 CUNYAC) vs. Bryn Mawr (6-15 Overall, 1-8 Centennial) Penn State Abington (7-19 overall, 1-11 NEAC)
Where: Bryn Mawr College, 101 North Merion Ave, Bryn Mawr, PA
First Serve: 11:00am/1:00pm
Live Video: http://portal.stretchinternet.com/brynmawr/
Live Stats: http://gobrynmawr.com/sports/wvball/2015-16/boxscores/20151031_f8xg.xml (CSI vs Bryn Mawr)
Live Stats: http://athletics.brynmawr.edu/sports/wvball/tournament/boxscores/20151031_isx9.xml (CSI vs Penn State Abington)
All-Time Series: The Dolphins have never played either of these teams.
Last Year’s Result: DNP
Players To Watch (CSI): Selma Kolenovic will add to her total of 115 kills today in hopes to leading her team to two wins before the start of CUNYAC Playoffs. Brittany Minondo will move the ball with grace near the net to help set up her teammates to spike it down for the kill.
Players to Watch (BM): Rachel Ofili will be the threat for the Owls as she has 182 kills on the year while hitting .360. Zoe Holman has been the reason for Ofili’s success as Holman has tallied 476 assists.
Players to Watch (PSUA): Sam Amaro is averaging 2.76 kills per set and has 243 on the year while hitting .165. If the Dolphins plan to score on the Lions they will have to get passed Breanna Lineman who has 31 blocks on the year.
News and Notes: The Dolphins have never played either of these teams in their history. Today’s tri-match will be the last pair of matches before the CUNYAC Playoffs where the Dolphins will take on the no. 3 seeded Lehman College Lightning in the Bronx, NY.