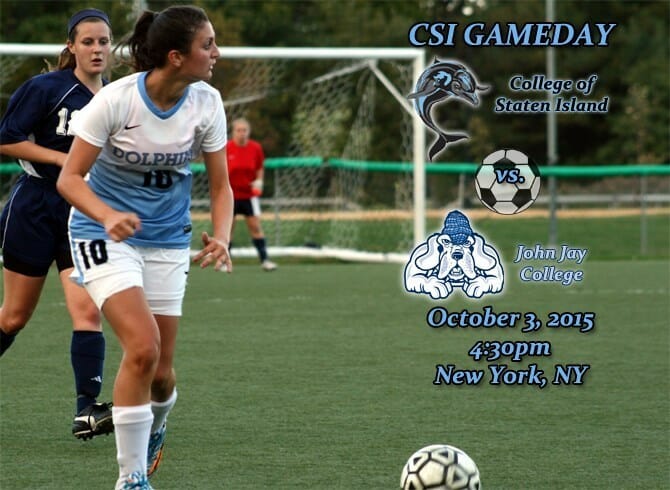 After a lengthy break, the College of Staten Island women’s soccer squad is back on the pitch today, travelling to Randall’s Island to take on CUNYAC-rivals John Jay College, at 4:30pm/  The Dolphins come in at 6-2, looking to improve on a 2-1 overall CUNYAC mark.  The Bloodhounds have opened up their CUNYAC year with a pair of ties and are looking to get into the win column.

CSI vs. JOHN JAY COLLEGE AT-A-GLANCE
Matchup:  CSI (6-2 overall, 2-1 CUNYAC) vs. John Jay College (1-5-2 Overall, 0-0-2 CUNYAC)
Where: Randall’s Island Field #73, 20 Randall’s Island Park, New York, NY
Kick-Off: 4:30pm
All-Time Series:  CSI leads, 12-0-2
Last Year’s Result:  CSI won twice, 2-0 & 3-0
Players To Watch (CSI):  Lauren Smith came off of a sensational outing against York College last week, scoring a goal and dumping in three assists in an 11-0 win.  For her efforts, Smith was named the CUNYAC Rookie of the Week.
Players To Watch (JJC): JJC has been paced by the extraordinary goalkeeping of Andrea Antoni, who is boasting an .844 save percentage, allowing just 1.70 goals per game.
News and Notes:   CSI has won the last seven games of the series dating back to 2012, and have not allowed a goal to John Jay since the 2005 season, a streak spanning over 1,100 minutes of play.  Offense has been at a premium all season long for the Bloodhounds, as they have only scored three goals in eight games.  CSI is 3-0 all-time on John Jay’s home field.  CSI has been idle for 10 days.  Their most recent game was canceled this past Wednesday.