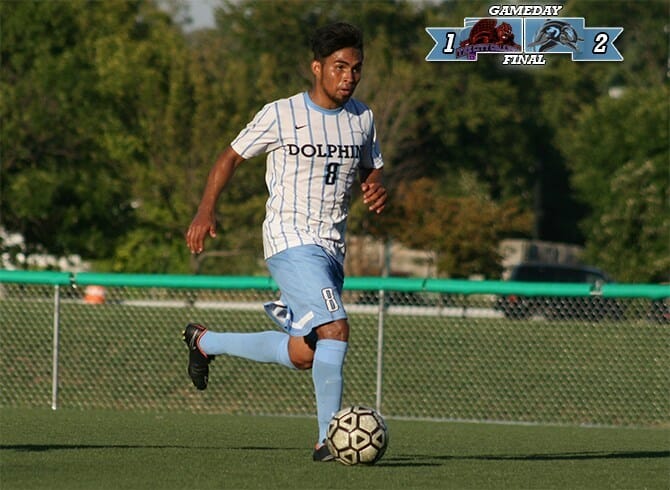 On a rainy and cold afternoon at the CSI Soccer Complex, the College of Staten Island was able to hold onto a 2-1 win over the City College of New York as part of CUNYAC competition. Unbeaten in their last five games, CSI improved to 4-6-1 overall and 3-0-1 within the CUNYAC, while the Beavers fell to 3-6, 1-2, respectively.

Apart from the teams, it was the weather that took center stage for this contest. A steady cold mist and drizzle mixed with 20-30 mph winds dictated the course of play, and many would-be scoring opportunities saw balls sail wide of targets. Both teams traded game play in the opening minutes, until CSI started to wrestle away many of the early chances. That said it was the visiting Beavers that struck first, on the second of its only two shots of the first half.

A CSI turnover at the defensive line at the 25-minute mark saw Abdul Rashid Adbulai get sprung free, and the right winger unleashed a shot from the far left of goal into the short side that snuck in past CSI starting keeper Kyle Coffey. Without the benefits of having controlled play, CCNY was up, 1-0.

The goal, however, sparked the Dolphins. The vocal group then started to sew together passes and less than four minutes later, CSI equalized. Dardan Nika scooped a ball up near the sidelines, and then raced in with enough time to send in a low-lining cross that cut through the wind and found the head of Philip Lefkowitz, who drilled the ball in past Maxwell Berkow to tie the game at 30:34.

The score stood up till halftime, as CSI held an edge in shots to that point, 12-2. In the second half, the game was more even as CCNY enjoyed the benefits of the wind at their backs. Both teams registered early opportunities but CSI earned a pair of corner kicks midway into the half and on the second one, the Dolphins found their go-ahead goal. After a set up in front spilled wide of the net, CSI’s Nermin Kurtesi drilled a ball through traffic and a CCNY defender was able to get in the way and block the shot down right in front of the goal mouth. The ball then spilled onto the waiting foot of Mohammed Ndao, who found the twine passed Berkow to give CSI a 2-1 lead with 25:44 remaining.

CCNY amped up the pressure from there but CSI was able to weather the storm. In the closing 10 minutes, Coffey made a couple of sterling plays in front of the net, preserving the win.

CSI will return to the pitch on Monday, when they host John Jay College at the CSI Soccer Complex at 4pm. The game is a make-up of a postponement on September 30.