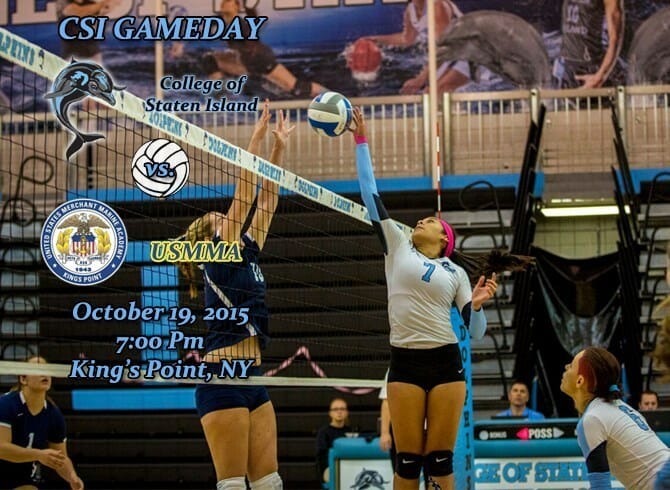 The College of Staten Island women’s volleyball team is back on the court tonight against United States Merchant Marine Academy tonight at 7:00 pm. The Dolphins have strung together two wins in a row and will look to make it three tonight.

CSI vs. U.S.M.M.A AT-A-GLANCE
Matchup: CSI (7-11 overall, 2-4 CUNYAC) vs. USMMA (13-11 Overall, 1-6 Landmark)
Where: U.S.M.M.A, 300 Steamboat Road, King’s Point, NY
First Serve: 7:00pm
All-Time Series: USMMA leads 4-1
Last Year’s Result: DNP
Players To Watch (CSI): The Dolphins will look to Selma Kolenovic to attack the net and continue racking up the kills. Rosamarie Gonzalez will be charged with guarding the net as she has been a brick wall this season with 36 blocks.
Players to Watch (USMMA): Dominique Pope has been an absolute nightmare for opposing teams this season as she has tallied a total of 214 kills. Kayla Gleason has passed the ball with great efficiency and has 506 assists to show for it.
News and Notes: The Dolphins will hope they can continue their win streak as their season starts to wind down. USMMA has the edge in common opponents this season as they have defeated Lehman College, John Jay, and Brooklyn College.