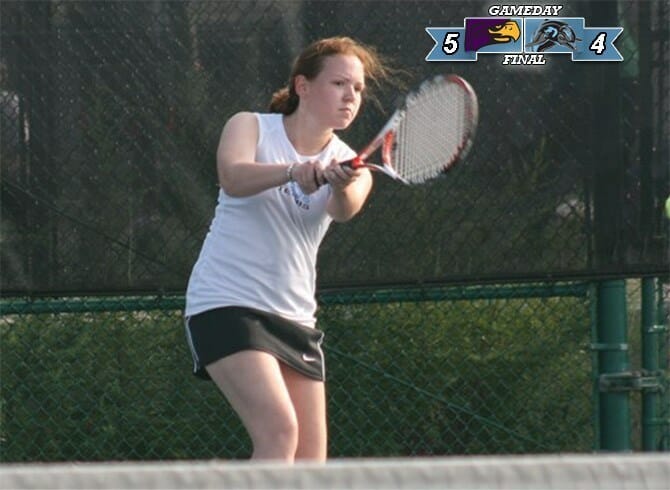 The College of Staten Island women’s tennis team saw their bid for a third straight CUNYAC title fall short today, falling to visiting Hunter College, 5-4, as part of the CUNYAC Postseason Championship Semifinals play at the CSI Tennis Center.  The Dolphins’ season finalizes at 14-4, while the Hawks improved to 6-6, and will face top-seeded Baruch College in the Final on Tuesday.

CSI got off to a fast start in doubles, ripping off the first two matches before Hunter would answer with a win in the No. 2 position.  First, it was the one-two punch of Nozima Toshpulatova and Sabrina Bragerton-Nasert scoring a crisp 8-3 win over HC’s tandem of Olivia Funk and Janani Bavanandan.  In a match that featured more points but moved at a quicker pace, CSI’s No. 3 team of Samantha Maizer and Viktoriya Volkova scored an 8-6 win over the Hawks’ Catherine Ng and Pauline McGlone.

Over at No. 2, however, Hunter was poised and grabbed an 8-3 win as Angelina Usherenko and Sara Beck, posted a win over Madiha Mulla and Michelle Kushnir.

Play moved on to singles and it became clear quickly that Hunter would threaten,  Ironically, it was CSI that registered first, as CUNYAC Player of the Year Bragerton-Nasert cruised by HC’s Janani Bavanandan in the first set, 6-1, and Bavanandan retired from the match from there, giving CSI a 3-1 lead.

Over at No. 4, CSI’s Kushnir scored a 6-1 win over Paulina Szegda, but in typical fashion to last year’s Final, Szegda battled back and returned the favor in the second set, 6-2.  In the third and final set, Kushnir was overpowering with a 6-3 win.  Last year, Kushnir win was the clincher, but this year it was only enough to get CSI even, at 4-4.

That left No. 3 Singles as the one to determine who would move on to the final, and unfortunately for the Dolphins, Hunter’s Angelina Usherenko looked overpowering.  First, she registered a convincing, 6-0, win over CSI’s Mulla, and in the second set the two battled for through long points.  With Usherenko up, 2-1, play was then moved indoors due to darkness, and after a delay the two resumed play.

The break only fueled Usherenko, as she powered to the next three points to take a 5-1 lead.  Mulla battled to win the next point, but Usherenko would win the next to take the 6-2 win, clinching the match for Hunter.

For the Dolphins, the loss was a tough one but the team has plenty to be proud of, having registered eight straight wins before this loss, exiting as back-to-back defending champs.  Their season will pick up again in the spring for a short series of matches.

Hunter and Baruch (a 5-0 winner over Brooklyn earlier in the day) will meet at Queens College on Tuesday at 3pm to determine the new CUNYAC champ.