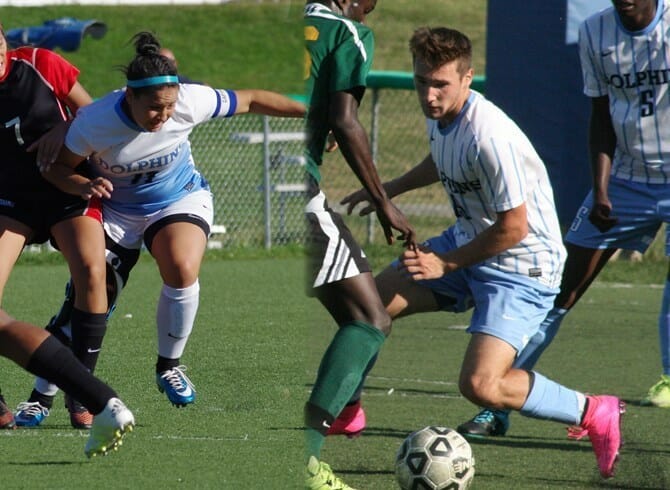 The College of Staten Island men’s and women’s soccer teams had just one game respectively on their schedules last week, but by virtue of the wins earned a pair of weekly honors through the City University of New York Athletic Conference. Senior Samantha Wysokowski was named the conference’s Player of the Week, while freshman Phillip Lefkowitz was named the CUNYAC Rookie of the Week.

Wysokowski was instrumental to the CSI win over John Jay on Saturday, scoring the game-winner with just a minute to go in the first overtime, to give CSI a 1-0 win. For Wysokowski, it was her sixth tally of the season and her third game-winner. After missing most all of the 2014 season due to injury, Wysokowski now has 62 career tallies, good for second all-time at CSI. This season she has also added a pair of assists and is up to 19 in her distinguished career.

Like the women, the CSI men earned a one-goal win in their lone matchup this weekend, a 2-1 decision over City College of New York. Lefkowitz was instrumental in the win. Coming off of the bench with his unit down 1-0, Lefkowitz drilled in the game tying goal in the first half with his head on a cross from Dardan Nika. CSI added a second half goal to win the match and remain undefeated within the CUNYAC. Lefkowitz stands second on the team with three goals, having added a pair of assists. He is also second on the team with 23 shots fired.

The CSI women return to action on Tuesday, hosting St. Joseph’s College of Brooklyn while the men return to the pitch on Wednesday to continue CUNYAC play against Lehman College at the CSI Soccer Complex. Both games start at 4pm.