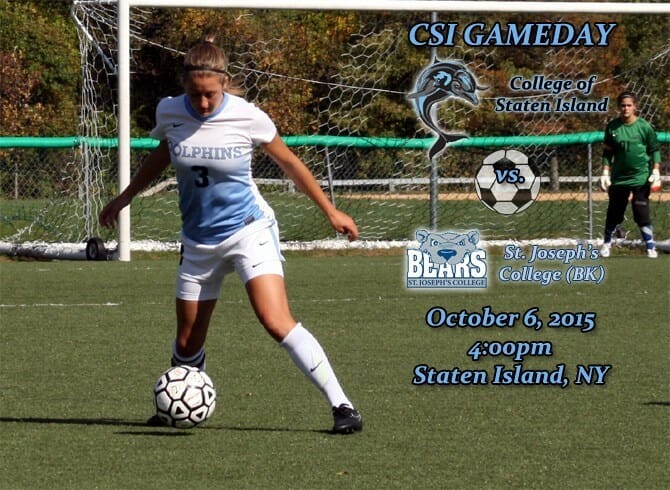 The College of Staten Island is coming off of a thrilling overtime victory over CUNYAC-rivals John Jay College, and will be back in the comforts of their home field this afternoon with a non-conference test against St. Joseph’s College (Brooklyn), at 4pm. CSI enters at 7-2, and will look to continue their two win streak over the Bears, who have lost four straight.

CSI vs. ST. JOSEPH’S COLLEGE (BROOKLYN) AT-A-GLANCE
Matchup: CSI (7-2 overall, 3-1 CUNYAC) vs. St. Joseph’s College – Brooklyn (1-6 Overall, 0-5 Skyline)
Where: CSI Soccer Complex, 2800 Victory Blvd., Staten Island, NY
Kick-Off: 4:00pm
Live Video: www.csidolphins.com/CSISportsNet
All-Time Series: First Meeting
Players To Watch (CSI): Samantha Wysokowski is second on the squad this season with six goals, and leads the team with three game-winning goals, including the overtime winner over John Jay on Saturday. Kristy Colangelo also earned her fifth shutout in goal this season, and improved her goals-against average to 1.41 this season.
Players To Watch (SJC-BK): The Bears are being led by Cansu Usta, who has scored seven goals on just 12 shots in six games. Six of those goals came against Medgar Evers College, SJC’s lone win of the season.
News and Notes: This is the first-ever meeting between the two schools. The teams share three common opponents thus far. Both teams defeated Medgar Evers (CSI 14-0, SJC 16-1) and both teams fell to Lehman College (CSI 1-5, SJC 0-8). Both teams also played Old Westbury this season. The Bears had a tough go of it, falling 11-0, while the Dolphins held on to a 1-0 win. SJC has scored in only two games this season, and have not scored in 367 consecutive minutes, a streak spanning over four games. With one more game-winning goal, Samantha Wysokowski will tie Hall of Famer Fiosa Begai with 13 in her career.