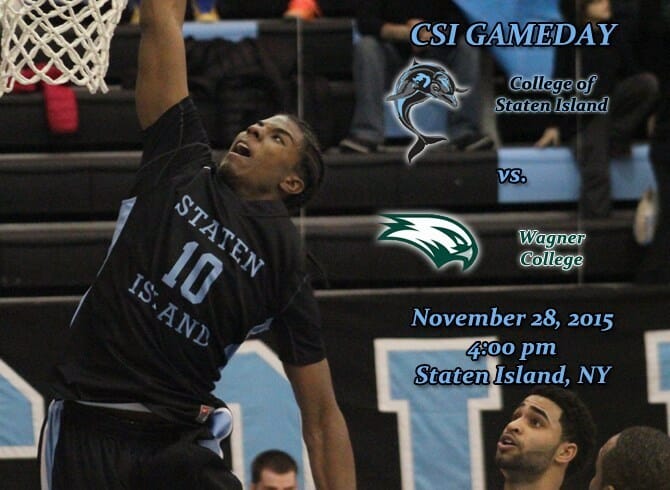 The College of Staten Island men’s basketball team got back on the winning side of the ledger earlier this week, and will look to parlay the success into weekend competition. The foe will be a mighty one, as CSI squares off against NCAA Division I Wagner College on Wagner’s campus. The Dolphins are 3-1 overall while Wagner comes in at 1-2, idle for the last week having picked up their first win of the season against the University of Maine last weekend.

CSI vs. WAGNER COLLEGE AT-A-GLANCE
Matchup: CSI (3-1 overall, 0-0 CUNYAC) vs. Wagner College (1-2 Overall, 0-0 NEC)
Where: Spiro Sports Center – 1 Campus Road, Staten Island, NY
Tip-Off: 4:00pm
Ticket Info:http://wagner.universitytickets.com/user_pages/event.asp?id=318&cid=26
Live Video: http://necfrontrow.com/webcast.php/WC-2989/?
Live Stats:http://www.sidearmstats.com/wagner/mbball/?
All-Time Series: Wagner leads 11-3
Last Meeting: November 23, 1999 – Wagner won 95-55
Players To Watch (CSI): Sophomore Edin Bracic erupted for a career-high 19 points against Hunter on Tuesday after being held scoreless in CSI’s loss to WPI last weekend. He leads the Dolphins with 9 three-point baskets this season. Senior Will Fonseca dropped a 24-point, 14-rebound performance against Hunter as well, matching a season high point total. He leads the Dolphins with 19.3 points per game and 8.5 rebounds per contest. Khaleeq Baum is CSI’s top point-scoring sixth-man, posting 8.3 points per game averaging just under 18 minutes per contest.
Players To Watch (WC):Sophomore guard Corey Henson has been Wagner’s top point-scoring dynamo this season, averaging 19 points per contest and coming off of a 24-point performance against Maine last weekend. Dwaun Anderson is averaging a healthy 12.3 markers this season while leading the team with 7.3 rebounds per contest. Look for 6-7 sophomore Japhet Kadji to provide plenty of muscle. The forward is averaging 10.3 points off of the bench this season, averaging 22 minutes per contest.
News and Notes: These two teams have not met in 16 years, renewing a rivalry that was rich from the late-70’s and through the 1980’s. The teams have only met twice since the 1989 season. Wagner has won the last three meetings. CSI’s last win in the series came on February 13, 1989, an 81-78 win at the Wagner campus. Wagner is 10-2 all-time at home against CSI. The two teams have only played twice at the CSI campus, the last matchup in 1982 back when CSI played at what is now Petrides High School…CSI is shooting 48.1% from the floor this season, while Wagner has struggled at times, connecting on just 39% from the field this season…Both teams like to shoot the three pointer. Wagner is averaging 21 three-point attempts per game while CSI is averaging 15.5 per contest…Prior to the game against Hunter, CSI had been out-rebounded in every game this season. That’s a calling card for Wagner, which uses its size well, having not been out-rebounded this season…CSI has won its last 13 games when scoring 70 points in a game. Wagner is just as good when they hit the magic number, having won five of their last six when scoring 70 or more. Conversely, CSI and Wagner have dropped their last 13 games when they have not eclipsed the 70 point mark.