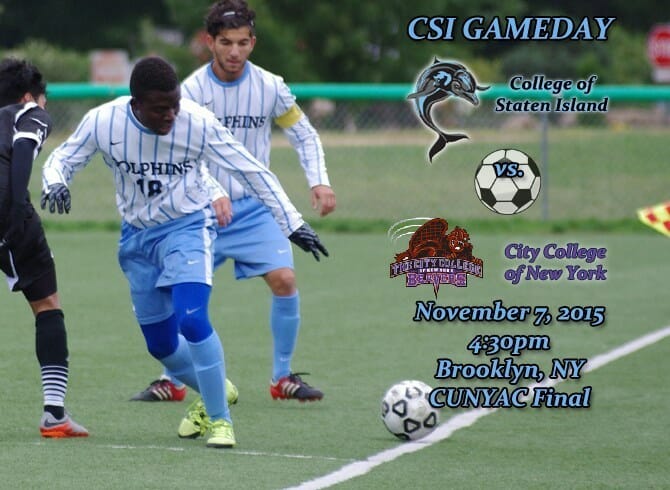 The College of Staten Island men’s soccer team earned a semifinal spot against John Jay College via an 11-0 victory over Medgar Evers College on Wednesday in the CUNYAC Quarterfinals. The Dolphins headed into the CUNYAC Postseason with the no.1 seed for the second year in a row. Their opponents of John Jay are ranked fifth in the tournament, and knocked off defending-champs Baruch College on Wednesday in quarterfinal play, 1-0.

CSI vs. CITY COLLEGE OF NEW YORK AT-A-GLANCE
Matchup: CSI (10-8-1 overall, 6-1-1 CUNYAC) vs. City College of New York (10-7 Overall, 5-3 CUNYAC)
Where: Brooklyn College, 2900 Bedford Ave., Brooklyn, NY
Kick-Off: 4:30pm
Ticket Information: http://www.eventbrite.com/e/2015-cunyac-mens-womens-soccer-championships-tickets-18630373950?
Live Video: http://cunyathletics.com/watch/?
Live Stats: http://www.sidearmstats.com/cuny/msoc3/?
All-Time Series: CCNY leads, 29-8-3
This Year’s Result: CSI won, 2-1
Players To Watch (CSI): Brayan Evo was a force in the win against John Jay College last weekend in semifinal play. Evo took home ECAC Metro NY/NJ Player of the Week honors. He punched in a hat trick with an assist against Medgar Evers, then donated two assists and the game-winning goal in the 5-2 win over the Bloodhounds. Emmanuel Agboola has been another dynamic force at the wing for CSI. He leads the squad with 9 assists. CSI keeper Kyle Coffey made a pair of saves during CSI’s regular season, 2-1, win over CCNY, but it was CSI keeper John Gioeli that played well in CSI’s 5-2 win over JJC last weekend, making a trio of saves.
Players To Watch (CCNY): Rashid Abdulai Abdul was the lone CCNY goal scorer against CSI during the regular season, one of his three goals on the year. CCNY’s attack is led by Kenan Redzematovic, who has tallied a team-high seven goals this season. Maxwell Berkow is the Beavers’ dynamic goalkeeper who has been sensational this season. He posted seven saves in the 2-1 loss to CSI this season, and 92 for the season, boasting a .800 save percentage. He made three stops in CCNY’s 2-0 win over Brooklyn in last weekend’s semifinal.
News and Notes: CSI has won the last two meetings against CCNY, but overall this has been a series that has belonged to CCNY, especially outside of Staten Island. CSI is only 2-17-2 all-time against the Beavers in games played outside of Staten Island. This is the seventh meeting between these two squads in CUNYAC postseason play, with the Beavers having won the previous six meetings. That will hardly be consequential to today’s players considering the last postseason meeting between the sides came 10 years ago in 2005, a CCNY, 3-2, Finals win. The winner of today’s contest will receive an automatic berth into the NCAA Division III National Championship Tournament. All selections will be made on Monday.