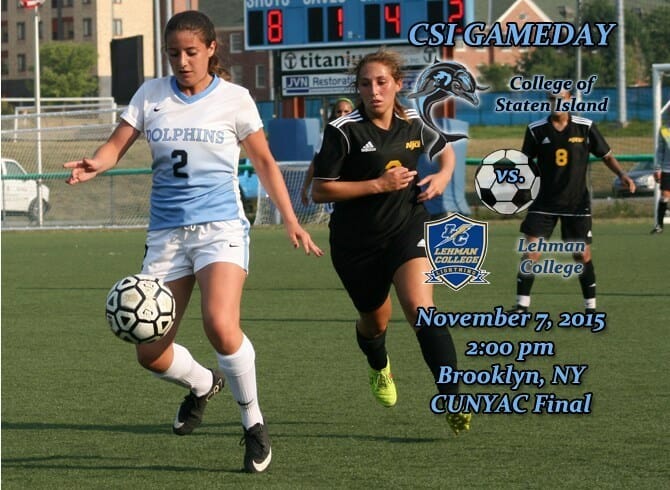 After a gritty 1-0 win over Brooklyn College in the CUNYAC Postseason Semifinals, the College of Staten Island women’s soccer team will take to the field today with the CUNYAC Championship on the line. The Dolphins will take on top-seeded Lehman College in a 2:00pm tilt. Lehman secured its position via a 5-0 win over John Jay College. This is the second straight year the teams will be meeting in the postseason, both of these squads met in last year’s semifinal.

CSI vs. LEHMAN COLLEGE AT-A-GLANCE
Matchup: CSI (12-4-1 overall, 4-1-1 CUNYAC) vs. Brooklyn College (14-2 Overall, 6-0 CUNYAC)
Where: Brooklyn College Field, 2900 Bedford Avenue – Brooklyn, NY
Kick-Off: 2:00 pm
Ticket Info: http://www.eventbrite.com/e/2015-cunyac-mens-womens-soccer-championships-tickets-18630373950
Live Video: http://cunyathletics.com/watch/?
Live Statistics: http://www.sidearmstats.com/cuny/wsoc3/?
All-Time Series: CSI leads, 4-1
This Year’s Result: Lehman won, 5-1
Players To Watch (CSI): CSI senior Danielle Alexandrini scored the game-winner over Brooklyn College and put her into a tie for the team lead in goals with fellow senior Samantha Wysokowski with 14. CSI keeper Kristy Colangelo notched her 9th shutout of the season on Wednesday, a new CSI single season record. She recorded 9 saves the last time these two teams met, albeit in a 5-1 defeat. Look for playmaking midfielders like Stephanie Rivera and Lauren Smith to try and control play, trying to keep possession away from LC’s playmaking midfield.
Players To Watch (LC): Lehman’s Chelsea Harris has been a goal-scoring machine for Lehman, posting 25 goals, a CUNYAC high, with 9 assists. She dumped in four of those goals against John Jay on Wednesday, and posted a goal against CSI when these two teams met up on September 19. Lillian Barreto scored two of her eight goals against CSI earlier in the year, and goalkeeper Stephanie Gonzalez posted eight saves in the win that day, her highest total of the season.
News and Notes: Lehman handed CSI their only defeat of the CUNYAC season earlier this year, 5-1. Prior to that, CSI had won the previous four games in the series, outscoring the Lightning, 18-1. The game broke up CSI’s 28-game unbeaten streak against CUNYAC opponents during the regular season. This is the second all-time meeting between the two sides in the postseason. CSI defeated Lehman, 5-0, in last year’s semifinals. CSI is 5-4-1 all-time in CUNYAC Championship games. This is Lehman’s first trip to the Final. The winner of this game will receive an automatic berth into the NCAA Division III National Championship Tournament. The selections in total will be announced on Monday.