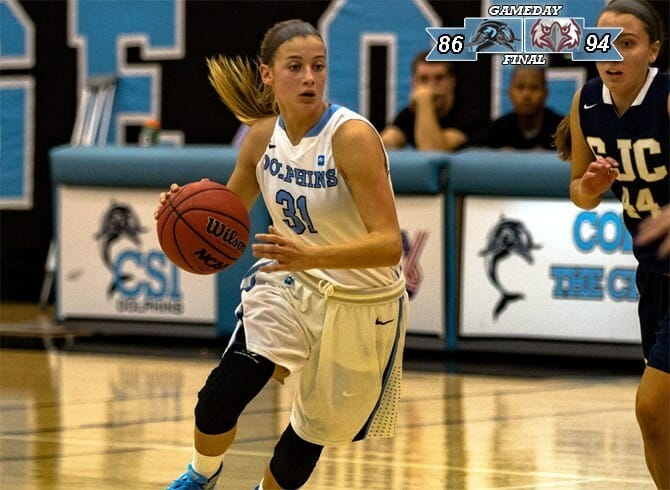 The College of Staten Island women’s basketball program surrendered a second-half lead and dropped their third straight today, falling in the consolation leg of the Kean Classic Tournament in Union, NJ, against Eastern University, 94-86.  The Dolphins dropped to 1-3 with the loss, while the Eagles lifted to 3-1.

The Dolphins were trying to shake the sting of surrendering a second-half lead against Kean University last night, but unfortunately were victims of the same fate against Eastern.  The teams exchanged a series of leads in the game before CSI would take a 51-46 lead in the third quarter.  But a strong third quarter finish and a 37-point fourth quarter was enough to power the Eagles to the win.

CSI led by as many as six in the early stages, as Christina Pasaturo gave CSI a 13-7 edge at the 4:33 mark of the first quarter.  The Dolphins continued to nurse the lead, taking a 20-18 edge at the end of one stanza, as Nicole Vierno scored CSI’s final two baskets of the period.

Taylor Price buried a three to start the second for EU, giving the Eagles back the lead.  The teams traded leads again, and then a jumper by Alyssa Carlsen gave CSI the first of three four-point leads in the stanza, but an Emily Lavin lay-in and a Taylor Azer three once again seized momentum, and at the half, Eastern took a modest, 34-33, lead.

CSI took back the lead and held it for all of a minute of the third.  The biggest lead came after a Jamie Pifalo three to give CSI a 51-46 edge.  A 7-2 run followed for Eastern to force a 53-53 tie, and then a Lavin bucket gave Eastern a 55-54 edge and Reggie Robinson added another lay-up right before the end of the frame to give the Eagles a three-point edge.

After a Samantha Flecker lay-up cut into the lead for CSI, Eastern then chose a great time for its most important stretch powered by Levin.  The center completed a three-point play and then knocked in two more lay-ups for a personal seven-point tear to give EU a 64-57 edge.  Then, after CSI knocked the lead down to 68-64, the Eagles ripped off a 10-0 run over the next three minutes, powered by another three Lavin lay-ups.  Flecker stopped the bleeding with a three to make it 78-67 with 4:30 left, but free throws down the stretch and another three Lavin lay-ups underneath provided all the support the Eagles needed, as they settled into a 94-86 win.

Lavin led all with 33 points, adding 10 rebounds and seven blocked shots. Azer and Robinson put up 17 points apiece with Robinson adding 13 rebounds.  For CSI, Pasaturo and Flecker shared the lead with 23 points with Flecker adding seven rebounds and Pasaturo seven assists.  The Dolphins were a +17 in the turnover column, but the Eagles dominated the boards, 53-30.

For their efforts, Eastern’s Lavin and CSI’s Flecker were named to the All-Tournament team.

CSI will now be idle until Tuesday, November 24, when they travel to Manhattan for their CUNYAC-opener against Hunter College at 5:00pm.