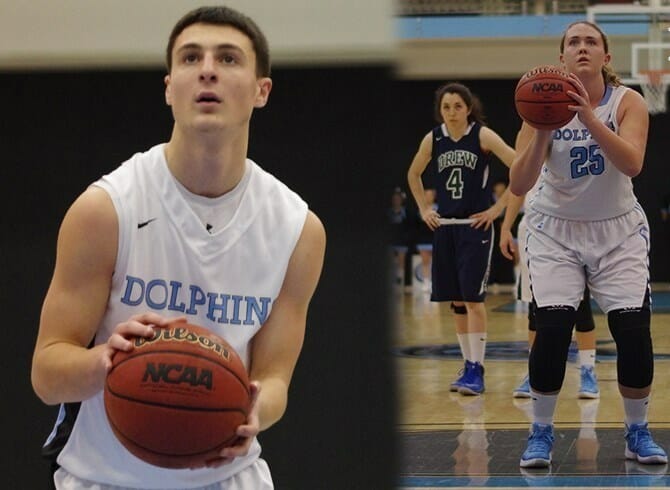 After a week of heavy basketball activity, the College of Staten Island men’s and women’s basketball squads have earned a pair of weekly awards bestowed to them by the City University of New York Athletic Conference.  Junior guard Frank Schettino was named the conference’s Player of the Week on the men’s side, while freshman Nicole Vierno garnered CUNYAC Rookie of the Week honors from the women’s division.

Schettino enjoyed a record-setting opening week for the men’s unit as CSI went 2-1 to open the season.  Against Stockton University, he powered for 14 points, seven rebounds, and four assists, and three days later, to open up play at the WPI Tournament in Worcester, MA, Schettino had a night for the ages.  Down 29 points, he led the Dolphins to a dramatic comeback win in overtime, scoring a new CSI single-game record 43 points in the win, 33 coming in the second half and overtime.  The total broke a 30-year record held by former Dolphin Cyrus Deas, who score 42 markers in a win over Medgar Evers College.  Schettino also led the team with 9 rebounds.  The next day, Schettino dazzled again, scoring 29 points, one short of his previous career-high entering the weekend, albeit in a 66-62 loss to hosts-WPI.

For the week, Schettino averaged 28.7 points and seven rebounds to go with a total of 10 assists and 9 steals, all team-highs.

On the women’s side, Nicole Vierno enjoyed a solid opening week of the season.  The Dolphins went 0-3, but Vierno proved a capable centerpiece.  First, she opened with a monster game in her collegiate debut, dumping in 20 points while collecting 13 rebounds, both team highs, in a tough loss to Drew University.  At the Kean Classic Tournament over the weekend, Vierno collected 12 points and 10 rebounds, averaging over 15 minutes per contest.

Both CSI teams will return to action on Tuesday, ushering in the CUNYAC portions of their season on the road against Hunter College.  The CSi men are 2-1 overall, while the women are 1-3, looking to snap their three-game skid.