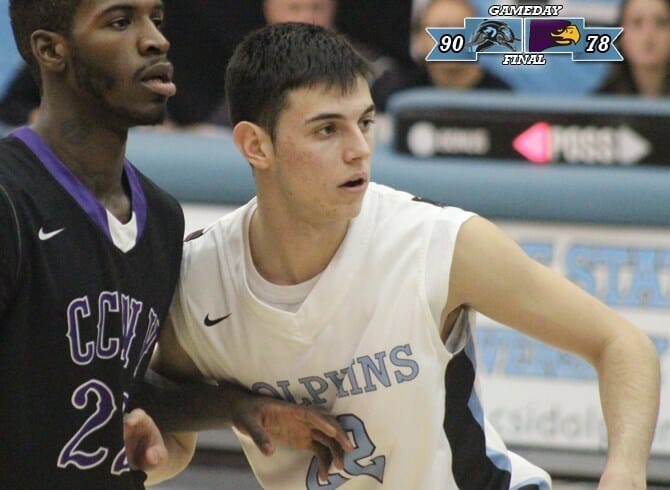 The College of Staten Island men’s basketball team erupted for 53 second half points and outscored Hunter College by 20, to help score a 90-78 win to open up CUNYAC play at the Hunter Sportsplex this evening in Manhattan.  CSI improved to 3-1 overall and 1-0 within the CUNYAC, while the Hawks dropped to 0-6, 0-1, respectively.

Despite the final score it was the home Hawks that used a strong first-half shooting touch to get out to a sizable advantage.  CSI scored the game’s opening seven points, powered by a Vincent Dacunto three and an Edin Bracic jumper.  But the Hawks chipped away, and at 14:54 made their move.  Down six at the time, 18-12, the Hawks pieced together a 15-0 run over the next seven minutes, taking a hefty, 27-18 lead.  Seven different field goal scorers registered for HC in the run, led by a two key buckets by Robert Ashamole.

Hunter expanded their first half lead to as many as 11 points, 42-31, with 2:32 left in the opening stanza, helped along by a Amer Lukac three-pointer.  A follow up three by CSI’s Dacunto whittled the lead down a bit, but still, Hunter was able to secure a 45-37 halftime edge.

The Hawks picked up right where they left off to start the second period, quickly using a Matt Franks three-pointer to match their biggest lead, 50-39, in the opening minute of the second half.  By that time Hunter was registering over 50% from the field.  Soon the Dolphins ramped up the defensive pressure and the Hawks shooting began to tail off, and the Dolphins made sure to capitalize.

Eight straight point by Will Fonseca got CSI down to just four at 17:21, and the team traded jumpers from there before a Khaleeq Baum lay-in with 13:07 to go tied the game up at 61-61.  After misses on both ends, CSI’s Khari Rollock gave the Dolphins the lead, and although Hunter would tie, another freebie by Wesley Smith, followed by a Fonseca lay-up put CSI up 66-63, with just over 10 minutes to play, and CSI never trailed again.

The Hawks narrowed the CSI lead to a digit, 68-67 with 8:11 to go, but a decisive 7-0 run, finalized with a Fonseca lay-up gave CSI a wider cushion.  Later still, another three-point bomb by Bracic and a Dacunto layup put CSI up 81-70 with just 4:09 to play.  In the closing minutes, another big three-pointer by Bracic with the time winding down seemed to clinch things for CSI with just under two minutes to play, giving the visitors an 88-77 edge before they would settle on their biggest lead as a final score, 90-78.

Playing without leading scorer Frank Schettino, CSI was paced by Fonseca’s big night of 24 points and 14 rebounds.  He was followed by Bracic, who turned in a tremendous 19-point three-block performance.  Dacunto tallied 15 on 4-5 shooting, while Rollock posted 11 and Thomas Delahanty 10 for the winning side.  HC secured a team-high 12 points each from Lukac and Robert Ashamole, with Ashamole posting a team-high eight rebounds.  CSI enjoyed a 45-34 edge on the glass, and shot 9-14 from three-point range, good for 64%, a season high.  It marked the 12th straight win for CSI over Hunter, and the 10th straight win for the Dolphins in Hunter’s gymnasium, dating back to 1999.

Up next for the Dolphins will be a borough showdown with NCAA Division I Wagner College at Wagner’s campus on Staten Island.  It will be the first meeting between the two sides since 1999.