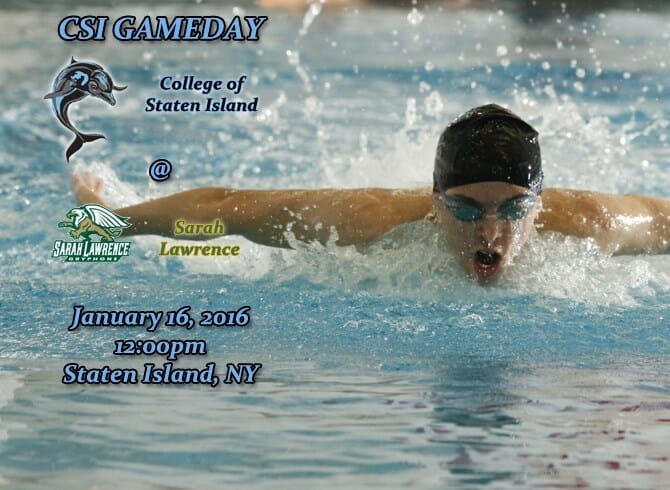 The College of Staten Island men’s and women’s swimming & diving teams are officially back in action, and will be taking part in a non-conference meet against Sarah Lawrence College today at the Sports & Recreation Center, at 12 Noon.  CSI is fresh off of its training trip a week ago to Fort Lauderdale, Florida, and seem energized for a push towards the CUNYAC Championship Meet.

CSI vs. SARAH LAWRENCE COLLEGE AT-A-GLANCE
Matchup:  CSI Men (3-3 Overall, 3-0 CUNYAC) Women (3-5 Overall, 2-2 CUNYAC) vs. Sarah Lawrence College Men (4-2 Overall, 3-2 Skyline), Women (6-2 Overall, 5-2 Skyline)
Where: Sports & Recreation Center – 2800 Victory Boulevard, Staten Island, NY
Meet Time:  12:00pm
Last Year’s Result:  Men: CSI won 108-68 / Women: SLC won 116-80
Players To Watch (CSI): For the men look for standouts Tim Sweeney and Derek Villa continue to be a successful one-two punch in the meet, as they were a year ago.  Freshman Nick Defonte has been solid as well and will look to continue to build on that success.  On the women’s side, Ewa Wojciechowska has been CSI’s most consistent threat and look for her to be valuable in the Freestyle events.  Naomi Gaggi has been putting up some valuable points as well in individual events.
Players To Watch (SLC):    Cameron Martinez and Anthony Lee will be looking to guide the Gryphons this afternoon on the men’s side and have been extremely consistent this far through the season.  SLC women are enjoying a terrific start to the season and freshman Devon Peal is a big reason why as she has already set some major records at the school.  Look for Jacqueline Quirk to also add some quality races today as well.
News and Notes: CSI and SLC share no common opponents this season and the teams split the meet last year, with CSI winning on the men’s side and SLC doing the same on the women’s end.  Just the men squared off against each other during the 2013-14 campaign, and CSI was victorious there as well.