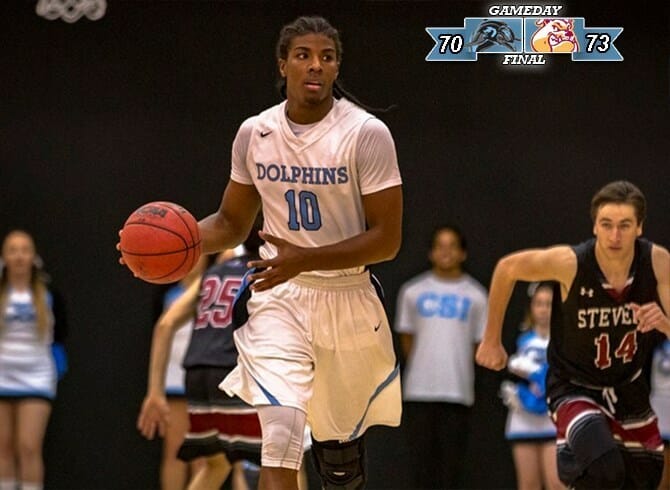 The College of Staten Island men’s basketball team squandered a big second half lead, as Brooklyn College came racing back and was able to hold off the Dolphins in a 73-70 affair at the West Quad Center in Brooklyn this afternoon as part of conference play.  The win lifted the Bulldogs to 10-2 overall and 4-1 in CUNYAC play, while the Dolphins fell to 8-3, 3-1, respectively.

Despite being on the wrong side of the final score, the Dolphins led for most of the afternoon and kept the Bulldogs at bay with as much as a double-digit lead in stretches, but the home Brooklyn squad caught fire for a chunk of the second half and rallied past CSI, then held on in the waning moments to lock it up.

The Dolphins took control from the very beginning, using three Will Fonseca inside drives, bookended by three’s from Edin Bracic and Vincent Dacunto, to take an early, 14-3 edge in the first three and a half minutes.  Four minutes later BC would reduce the lead to four, but momentum once again turned toward CSI and the Dolphins this time grabbed a 12-point edge on a Khaleeq Baum dunk that made it 29-17 with 7:45 to go.

IN a recurring theme of the game the pendulum continued to dance.  Free-throws by Egzon Gjonbalaj and Lorenzo Williams dipped the CSI lead back down to five, before the Dolphins took an eight-point lead into the lockers, 39-31, aided by a buzzer-beating layup by Fonseca.

It sure looked like much of the same in the second half.  BC chopped the lead down to six, before CSI rallied to take a pair of 11-point leads, the last at 10:43 on a Baum layup to make it 54-43.  From there, however, the home team turned up the heat.  A layup by Jamel Gist got Brooklyn started, and after a CSI miss, Williams hit a three as the shot clock was winding down to continue the run.  After CSI’s Schettino missed a three the other way, Dennis Balsam canned a three, and just like that, BC was down two less than three minutes later.

After a CSI timeout the run only continued.  Khari Rollock missed a three and Gist converted on a fast break to tie the score, and after more CSI misses, BC added four-straight free-throws to take a 58-54 lead, completing a 14-0 run.  With 5:33 to go, another Gjonbalaj three gave BC their biggest lead at 63-57, making the run 19-2 in all over the six minutes.

From there, it became CSI’s turn to try and chip away.  Fonseca scored a three-point play to respond immediately, and with 2:37 to go the senior got CSI to within 67-66.  After trading scores twice the game reached a crucial phase with 1:29 to go.

At the line, Thomas Delahanty missed the front-end of a one-and one, and after a BC turnover, Bracic then missed a crucial three for CSI.  The Dolphins still had opportunities, as with 13 seconds to play, Gjonbalaj missed two straight free-throws.  Down to a last shot, Delahanty was then whistled for an offensive foul on a very questionable call while setting a pick.  After a timeout, CSI promptly fouled and Williams drained both free throws.  Down to one last gasp, Fonseca missed what would have been a game-tying three at the buzzer and CSI fell, 73-70.

CSI was able to hold BC to just 37% shooting, but the Bulldogs enjoyed a huge, 40-29 advantage on the glass.  CSI was also a negative-6 in the turnover column.  Fonseca led all scorers with 32 points, adding seven rebounds, while Bracic added 14 points and Delahanty added 11.  For Brooklyn, Williams was the leader with 21 points, while Gjonbalaj was crisp with 20 points and game-high 12 rebounds, adding two blocks.

?Next up for CSI will be a home test against City College of New York on Tuesday, January 5, at 7:30pm, part of a CSI doubleheader.