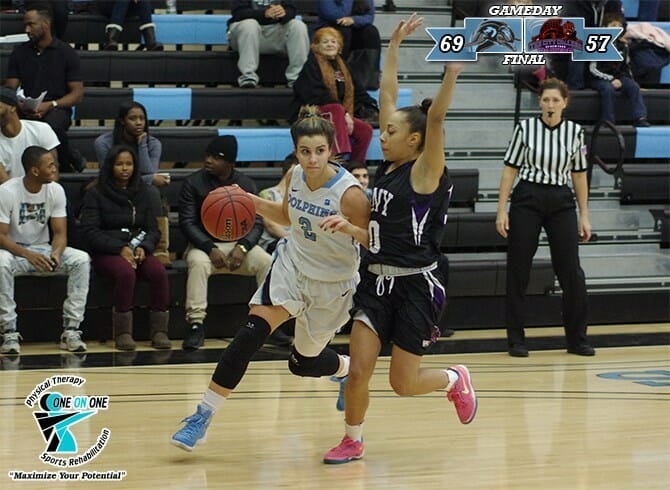 The College of Staten Island women’s basketball team took on City College of NY tonight in a CUNYAC matchup at the CSI Sports & Rec Center.  The Dolphins broke down the Beavers’ dam enroute to a 69-57 victory to improve to 8-5 overall and 4-1 in the CUNYAC while CCNY fell to 6-6 overall and 2-3 in the CUNYAC.

The Dolphins opened the game down early as Tiara Brown for the Beavers was having her way in the paint.  Brown was responsible for four of the six points that held CCNY ahead of the Dolphins early on.  As the quarter drew on the Dolphins could never close the six point gap which sent the women into the second quarter behind.

Jacqueline Cali initiated the scoring for the Dolphins at the start of the second quarter which led to the Dolphins tying the game for the first time.  Samantha Flecker quickly followed that up with a lay up to give the Dolphins their second lead of the game. The lead however, would be short lived as Alexis Akridge would drive to the basket and take the lead back for her squad.

The Dolphins’ pace of play was the turning point midway through the second quarter as they used their speed to run down the court for easy fast break points.  At the half the Dolphins would hold a 10-0 edge in fast break points. The speed seemed to wear on the Beavers as they conceded their lead to the Dolphins after CSI went on a 8-1 run late in the quarter which put them into halftime up eight.

CSI’s free-throw struggles continued in the first half as they shot just 4-of-12 from the charity stripe. Both teams were deadlocked at 22 rebounds apiece while the Beavers had 13 turnovers to 9 for the Dolphins.

CSI came out of their locker room and carried their momentum over from the first half and continued to extend their lead.  Christina Pasaturo kicked off scoring for the Dolphins in the second stanza with a fast break lay up to give the Dolphins a 10-point lead over the Beavers.  The women would not surrender their double digit lead until late in the fourth quarter when the Beavers were able to knock it down to 9.

Tim Shanahan must’ve preached about the missed opportunities from the charity stripe in the first half as the women came out in the second and shot 15-of-19 from the line.  The defense for the Dolphins was stout in the third quarter as they allowed just six points while scoring 16 of their own.  Nicole Vierno and Jamie Pifalo were huge in the second half when it came to free throws as they both shot a perfect 4-4.

With an 18-point lead in the fourth quarter the Dolphins slowed down their attack and waited for the shot clock to get down to single digits before attacking the rim.  The Beavers continued to attack which resulted in their highest scoring quarter of the game (20 points).

Pasaturo led all scorers with 18 points and 9 assists while Flecker added 17 of her own to go along with Pifalo’s 12.  CSI wound up turning the ball over a game high 22 times after edging out the Beavers early who finished with 19 of their own.  The Dolphins held a slim lead in rebounds 47-44.  CCNY’s physical play style led to a lopsided 30-13 foul differential.

The Dolphins will return to action on Saturday when they face yet another CUNYAC opponent in Lehman College here at the CSI Sports & Rec Center at 1:00 pm.