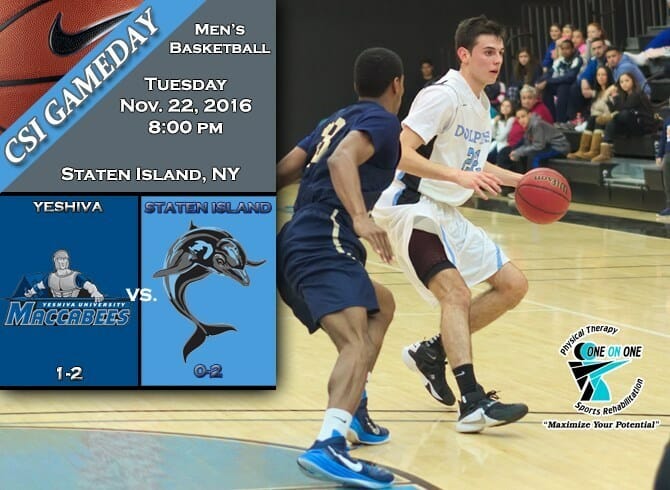 The College of Staten Island men’s basketball squad will have their home opener tonight when they host Yeshiva University at 8:00 pm at the CSI Sports & Recreation Center.  The Dolphins have started the season 0-2 and will look to bounce back tonight against the Maccabees.

CSI vs. YESHIVA UNIVERSITY AT-A-GLANCE
Matchup: CSI (0-2 overall, 0-0 CUNYAC) vs. Yeshiva University (1-2 Overall, 0-0 Skyline)
Where: CSI Sports & Recreation Center- 2800 Victory Blvd, Staten Island, NY
Tip-Off:  8:00 pm
Live Stats: www.sidearmstats.com/csi/wbball
Live Video: www.csidolphins.com/csisportsnet
All-Time Series: CSI leads 3-0
Last Meeting: Feb 6, 1999 – CSI won 70-51
Players To Watch (CSI):  Frank Schettino has picked up where he left off last season, averaging 24.5 points per game and playing 36 minutes a game.  Although Schettino has been pouring in the points this season, he has been turning the ball over quite a bit.  Through two games this season he has 10 assists and 16 turnovers.  For the Dolphins to be successful the 1,000-point scoring senior will need to protect the ball going forward.  Edin Bracic is a cerebral shooter from behind the arc and when he’s left open can hurt opposing teams. Bracic is shooting a blistering 43% from three and will get to shoot on his home court for the first time this season.
Players To Watch (YU):  Judah Cohen has led the way for the Maccabees so far this season with 16 points per game in 37.7 minutes per game.  Supporting him has been Michael Berg with 14 points per game but Berg is only averaging 24.3 minutes per game.  Berg is the clean-up man around the glass, grabbing rebounds to limit opposing teams second chance opportunities.
News & Notes: After opening their season with a big 92-66 win over CUNYAC opponents CCNY, the Maccabees have dropped two straight. Yeshiva is averaging 85 points a game whereas the Dolphins are putting up 72.5 a game. Yeshiva has been lethal behind the arc this season as they are burying 12 three-pointers a game.  Last season the Dolphins went 9-3 on their home court and will look to pick up their first win this season, while doing it on their own court.