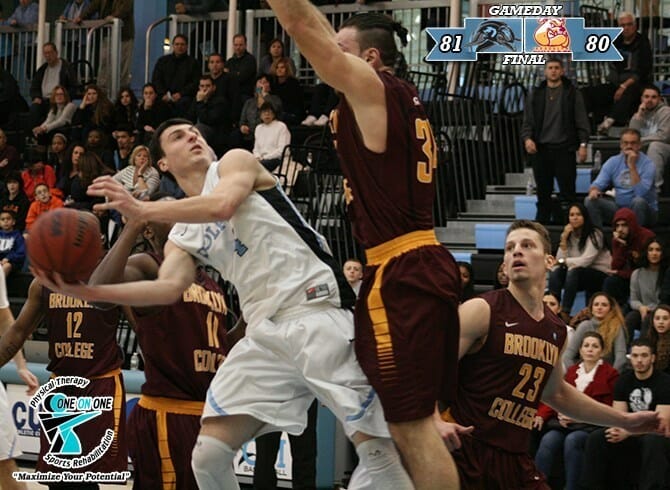 The College of Staten Island men’s basketball squad picked up a huge win this afternoon at the CSI Sports & Rec Center, 81-80, over top of the table Brooklyn College Bulldogs.  With the win the Dolphins improve to 15-5 overall and 8-3 in the CUNYAC while the Bulldogs fall to 16-4 overall and 9-3 in the CUNYAC.

The Dolphins jumped out to an early 7-3 lead over top of the table Brooklyn College.  Staten Island refused to let the Bulldogs back into this game early and kept them at bay with 54% shooting from the floor.  Frank Schettino came into this afternoon’s game needing just 17 points to join the 1,000 point club. Schettino started the game hot and scored 15 of the 17 needed points in the first half on 6-of-9 shooting.

The visitors were able to shrink the lead to just three with 11:56 to go when Jamel Gist converted a contested layup.  The Dolphins really started to heat up mid-way through the first half which translated into an 8-0 run to extend their lead to 31-19 over the Bulldogs. The men would squander their double digit lead when Dillion Williams sank a three-point shot.

CSI would quickly regain their double digit lead when Khari Rollock used his quick hands to to get a steal which led to a fast break layup for Will Fonseca to give the Dolphins a 39-29 point lead. Schettino would give the Dolphins their largest lead of the half (13) when he maneuvered his way to the basket to convert a layup.

The Dolphins would head into the half with a 48-36 lead and Schettino would lead all scorers with 15 points. Lorenzo Williams was able to keep up with Schettino’s pace and finished the first half with 14 points of his own. CSI held a 24-16 edge in points in the paint over the Bulldogs while Brooklyn’s bench narrowly edged out Staten Islands’ bench 11-10.

The men came out in the second half looking good and were able keep their big lead intact for the early part of the second half.  Around the 12 minute mark the Dolphins found themselves missing shots while the Bulldogs simply could not miss.  Brooklyn was able to nullify a 13 point lead down to just one by going on a 21-7 run to trail the Dolphins 73-74.

Schettino was cold for the first part of the second half, but he was able to join the 1,000 point club when he drained a three with 10:00 minutes left in the second half.

A game which saw the Dolphins with a big looking comfortable turned into a highly competitive possession contest.  CSI lost their lead with with 3:27 left in the game when Egzon Gjonbalaj hit a jumper to give them the lead back for the first time since the first minute of the game. Vincent Dacunto, who was quiet for a majority of the game (1-2 FG), drained a clutch three-point shot to give the Dolphins a two point lead with 3:14 to go.

The men would see their lead increase to three with 1:28 left in the game and it would turn out that that would be the last time the Dolphins would put up a point for the rest of the game. The Bulldogs would not go quietly as E. Gjonbalaj would drive down the heart of the lane and slam down a dunk to make it a one point game.